We’re in beautiful Whistler, British Columbia for the opening gala of

The whole of Whistler is really constructed around this magical skiing. The hotels are “ski-out” – there are ski valets so you can ski right to the lobby door, check your skis, and walk right to your room in  your stocking feet if you so wish. The village is packed with all the vacation delights you might hope to pa

rtake in when not skiing – there’s shops and galleries and most of all, ultra-deluxe restaurants for your taste buds’ every desire, and they’re all snuggled up cozily in a pedestrian-only enclave. If you’re tired of skiing, you can try snowshoes, or zip-lining, or dog sledding. Or, you know, fuck that shit: there’s 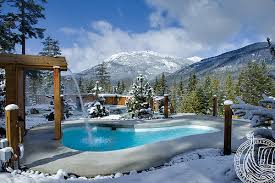 award-winning spas and hot springs, and I’m telling you right now there’s nothing more romantic than sitting in a hot tub with a glass of champagne while the snow falls quietly around you.

Of course, being assholes, we’ve come to one of Canada’s most naturally stunning outdoor spaces, nestled between two majestic mountains, in order to spend time in a cramped, windowless room, watching movies.

Welcome to the Whistler Film Festival!

Carol is a Todd 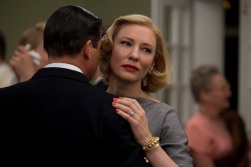 Haynes-directed drama starring Cate Blanchett and Rooney Mara. Carol (Blanchett) is struck by the kindness of a stranger named Therese (Mara) just as her life is falling apart. Picture New York, 1950s: her marriage is ending, messily, and custody of her daughter is uncertain. She pursues a friendship with the much younger woman but they struggle when their feelings turn romantic. The world isn’t quite ready for such an affair.

single word said against her. She’s easy to adore because she’s consistently great. I think Oscar will remember her come nomination day, and it might be knocking on Mara’s door as well. Blanchett is an absolute dream here, so present in every scene, so poised. Her anguish is apparent in a look, the lowered lashes, the head turned just so. She’ll remind you of an actress from another era, which is perhaps appropriate since this is a period piece (Matt pointed out that Haynes seems to favour “the 1950s in the closet”, and felt that Carol not only stood up to Far From Heaven, but exceeded it).

Haynes sets a mournful tone early on. His direction is artful, considered. The story is slow, and simple, like a rose in his hand shyly opening its petals. We rely so much on the silent interplay between our two leads, so much is said just by their smouldering eye contact that we need excellent, ready camera work, and get it. Mara and Blanchett enhance each other on-screen, there’s a crackling electricity that makes it almost titillating for us to be eaves dropping on their early encounters.

But this is the 1950s. Things aren’t going to go smoothly for these two. This is not just a character study. It’s a story of suppression, repression, forbidden love. The programming director of the Whistler Film Festival introduced it say “This film moved me to tears, and I hope it does you too.” I thought it a little strange that he wanted me to cry, hoped that I would cry, but he was right. I was moved.

Carol is as rich as the chocolate tart we had for dessert last night. Every bite is nuanced and full of flavour. Both sinful and sweet, every crumb devoured without regret because it is good. And when it’s done, you can leave the table feeling satisfied.

27 thoughts on “Whistler, Day One”