Born To Be Blue: Ethan Hawke plays Chet Baker during a period of 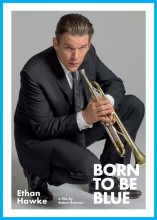 time in the 1960s when he was approached to make a movie about his troubled life as part of a comeback effort. It’s inspired by Baker, but not a true biopic, so Hawke has plenty of room to spread his wings and make the character his own, in what is probably one the best performances of his career. His charming junkie act lends a little humour to the proceedings, surprisingly, so it’s not as bleak as you might think. His co-star, Carmen Ejogo, plays a composite character representing Baker’s “women” and is stunning, not just because she’s beautiful but because she gives a delicate and refreshing performance, a real break out, and fearless alongside such a seasoned professional. Canadian actor Callum Keith Rennie rounds out the cast as Baker’s long-suffering agent, and he attended the screening to tell us all about painting fake palm trees 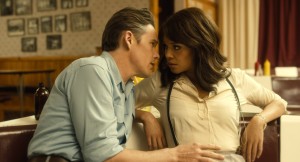 to make Sudbury pass for California, and squeezing in the shots before the first snowfall of the year. This movie was a real passion project for Hawke and it took a long time, and funding from both Canada and the UK, to get the thing off the ground. It’s a real treat for jazz fans because the music permeates this film, as it should. It’s filmed in a kind of jazzy way too, a little offbeat maybe, but with plenty of sparkle. So if you can get over Hawke’s terrible Chet Baker teeth (or lackthereof), you should find lots to enjoy in this fantastic, tragic film. 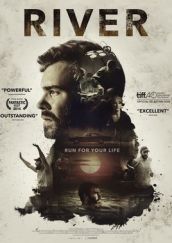 River: An American volunteer doctor in Laos becomes a fugitive when he intervenes in the rape of a young woman and her assailant’s body is later pulled from the Mekong River. It’s one of those spiralling, out of control situations, and we’re right in the heart of it thanks to writer-director (and Canadian!) Jamie M. Dagg. Fuelled by fear, the doctor makes an attempt for the US embassy. The editing has energy that propels the story forward, but it’s more than just a thrilling escape attempt. This movie leaves you wondering about the ethics of visiting or living abroad – obeying laws that may clash with your own ethics, and who pays the price when the two disagree. Sean’s got a great review of the movie here.

The Legend of Barney Thomson: Robert Carlyle directs himself in the eponymous role, an awkward and shy Glaswegian barber who just so happens to take up a new hobby: killing. An inept local 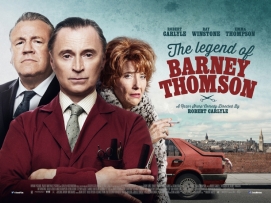 detective (Ray Winstone) is on to him, and it becomes a battle of the bumbling fools to see whose luck will run out first. One thing Barney’s got going for him: his mother, played uproariously by the ever-wonderful Emma Thompson, who goes balls to the wall with her delivery. Kitted out with a prosthetic neck, her accent is through the roof and it’s the most fun I’ve seen her have with a role, maybe ever. The movie is FUNNY. The accents are a little thick to my Canadian ears, but the jokes land so quickly that I never struggled for long. It’s like the Scottish Fargo – an absurd farce that’s just a whole lot of fun. Carlyle was very humble at this, the North 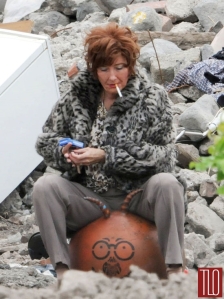 American premiere of his movie (sidebar: this one too was funded with Canadian dollars!). He called his character’s suited look a tribute to his father – “My dad was a tie man his whole life.” He acknowledged several other personal touches, including shooting on locations where he’d grown up. He credited Danny Boyle with being a particular influence – “he just creates the right atmosphere” and taught him “not to interfere.” He also called a certain scene a “definite nod to David Lynch” (his Blue Velvet, in fact), but I won’t spoil it for you because it’s sure to make you smile. This movie was entertaining and well-executed, so I was surprised how emphatically Carlyle responded to an audience member who asked “Do you want to direct more films?”, the answer being “No!”