I have next to nothing to say about this movie. On the one hand, the title is so generic and irrelevant to the movie that I kept passing it up on Netflix because I believed I’d already seen it, and on the other hand, the title is sexist and mildly insults me, while still being 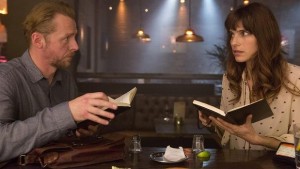 irrelevant to the movie, which makes the insult all the more infuriating.

I suppose Simon Pegg is the dolt who needs to “man up” though why is unclear. He’s just come out of a bad divorce and is set to meet a young woman on a blind date, only Lake Bell hijacks it instead, and of course they spend a lovely day together until it is discovered that she is the wrong date, and worse still, not 24, which was both the allure and the point of the original blind date.

What does it mean to “man up”? It’s defined as: to be brave or tough enough to deal with an unpleasant situation. Because bravery and toughness are male traits? Beca

use the person who came up with this expression has never seen a man with a simple head cold? To “man up” implies a manly scenario, and a failure of a certain man to fulfill his obligations or responsibilities as a man. In the movie’s case, Pegg has an unfaithful ex-wife, and a charming if slightly mendacious new flame. How exactly do either of those scenarios require testicles in particular? And what would become of this movie if “man up” didn’t mean create a big, Hollywood-style hullabaloo where you declare your undying love for a woman you just met in front of a crowd of rowdy strangers, but instead “man up” meant, admit your fears, communicate

honestly, be flexible, be vulnerable. Or what if being this kind of bold and brave didn’t require a Y chromosome and it could be Lake Bell, in all her ovarian glory, reaching across the void? The phrase “man up” implies such a rigid view of masculinity it punishes both the sexes (and all the sexes in between) and leaves us all sitting in painful little boxes having to watch insipid little romcoms the world could do wi 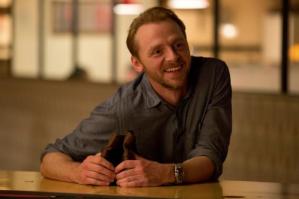 And do you know what the worst part is? It isn’t even a terrible movie. Simon Pegg and Lake Bell are quite good together. It’s never been more fun to be a third wheel on a blind date. So while I’m not claiming it’s groundbreaking or anything, it does deserve a better title than this weak offering. End rant.