If you don’t know that name yet, stay right here while I get a nice wooden baseball bat to beat you over the head with. Don’t move, I’ll be right back.

Seriously, I talk obsessively about Waititi and his movies because I just adore them. He’s remained mostly under the radar with offbeat, cult hits like Boy and Eagle Vs Shark, which have made him famous in his native New Zealand but all but undiscovered over here in North America. WHICH IS A FRICKIN CRIME. 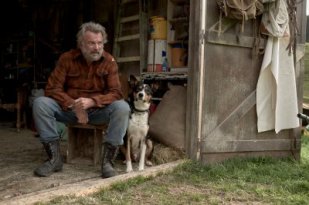 Last year his vampire mockumentary What We Do In The Shadows was a modest breakthrough that earned him some well-deserved and super duper overdue attention. It will also help that he’s had a hand in writing Disney’s upcoming animated film Moana and will direct Thor: Ragnarok, which will be his first budget exceeding $12.

But back to Hunt for the Wilderpeople, perhaps the best thing I saw at the Tribeca Film Festival and maybe the best thing Waititi’s done to date. He adapted it for the screen himself and as the film opens up, you immediately get the sense that it is a labour of love. The beautiful, lush New Zeala

nd bush is on proud display in soaring shots that will give you serious travel envy. Ricky Baker (Julian Dennison) is a boy who’s had a run of bad luck with foster homes, and his child welfare worker is quick to give a laundry list of his transgressions. This doesn’t deter his determined newest foster mum Aunt Bella (Rima Te Wiata) but Uncle Hec (Sam Neill) is a lot more reticent and gruff. Their primitive way of life is a bit of a shock to gangster-wannabe Ricky, but that’s just the tip of the iceberg because soon events will have him and Uncle Hec running from the law and hiding out in the bush as an intensive manhunt for them is underway.

The movie becomes an odd-couple adventure with Waititi’s niche sensibility and loads of mass appeal. Seriously – who on this green earth could fail to be charmed by this movie?

For such an endearingly quirky comedy, it has no right being even half as beautifully shot as it is. There’s a gloss to the film thanks to some real cinematography that’s been missing from his previous work. A lot of care has gone into this film and the casting is just one easy example of how diligently the thing is put together. Sam Neill is an interesting choice and brings the right mix of gravelly loner bluntness and a secret longing for connection. But it’s Julian Dennison who will leave the largest impression. A kid actor can make or break your movie when he’s in a central role, but Dennison is a professional, easy and natural in front

of the camera. There’s pain behind his farcical behaviour, and in allowing us to see both, there’s real depth and emotional investment in the characters. Waititi, Rachel House, and Rhys Darby provide excellent supporting roles that’ll leave you cramped from laughter. Positively bruised from chuckling. It’s a new personal best for Waititi and a new sentimental favourite for me, but one that deserves its place among the very best movies of the year, period.

26 thoughts on “Tribeca: Hunt for the Wilderpeople”