It looks promising on paper: two radio station journalists get locked out of a big story in Ecuador so they decide to make it up instead. Eric Bana plays 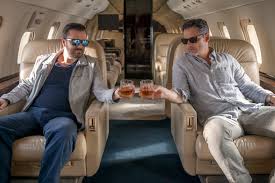 Frank, the dashing and charismatic reporter while Ricky Gervais plays his lackey, Finch. Finch is a clumsy and oblivious guy with a beautiful but disloyal wife (Vera Farmiga) whose ineptitude causes he and Frank to miss their career-making flight to Ecuador just as a war is breaking out.

Unable or unwilling to admit their mistake, the two men decide to hole up in New York City and broadcast fake reports convincingly doctored via satellite phone. Somehow neither anticipates that this will get out of hand, even when a sweet colleague (Kelly MacDonald) worries over the increasing threat to their safety. Do things snowball? Yes, yes they do.

Ricky Gervais adapted the script from an existing French movie (Envoyes tres speciaux). Nobody skewers celebrities quite like Gervais, his stand-up is tightly written and expertly delivered, and he’s got so many successful TV shows that IMDB stopped counting . Movies, however, seem not to be his forte. There were moments during Special Correspondents when I thought: “Niiiiiiice.” but those turned out to be little desert islands in a huge sea of disappointment.

anything intelligent or funny or worthwhile or clever. It’s flimsy. Like, paper-thin. And the characters are so one-dimensional that while we can’t really believe that there is not one but two Hottie McHottersons willing to bed Finch, we also don’t really care. This feels lazy and phoned-in and at times it also looks downright cheap, and I don’t just mean that it was filmed in pretend-NY Toronto (although it was. Sidebar: Gervais’s father is Ontario-born and French-Canadian).

The cast is fairly impressive but the poor script and direction make sure there are no stand-outs (and to be honest, I’m still wondering if the stuff with America Ferrera was just really weird and unnecessary or if it was as downright racist as it felt). In the end, Special Correspondents isn’t even a satisfying way to pass the time. If you’re looking for something decent to watch on Netflix, look elsewhere – perhaps to Grace & Frankie, a series that actually does have something to say, and lands laughs while doing it.