Captain America made a movie that feels like a cheap knock-off Richard Linklater.

Chris Evans directs himself in a starring role as Nick, a trumpet player busking in Grand Central Station one night when he can’t help but notice Brooke (Alice Eve) in distress when she misses the last train by a fraction of a second. Her purse has been stolen and now she can’t get home to Boston, and her tears tell us it’s imperative that she does.

Structurally similar to Linklater’s Before Sunrise movies, the couple spend one romantic night together roaming the streets of New York City, talking and getting to know one 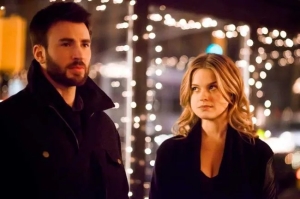 another. Like any first date, the movie doesn’t play all its cards right away. It flirts with us a bit, hinting at what’s still unsaid. The unfortunate thing is that this movie never puts out. It teases a lot of things that never actually develop. When our pants are down, nothing’s doing. This movie turns out to be a disappointing date: there’s no heat, no essential spark. It never delivers on its promise. And I was really frustrated with it dropping the ball so often. That’s just lazy.

Evans and Eve are charming, but not charming enough to overcome the sometimes cheesy script and the frankly unlikely scenario. Have you ever been on a first date and wished there was a big red button that you could push to end it? Like, you don’t want to hurt their feelings, they’re not really a bad person, just not the right person. You’re already bored 10 minutes in and you’re dying to abort, but now you’re stuck – and god forbid they order dessert. You want an out.

While real-life dates don’t have big red buttons, Netflix kind of does. It’s called STOP. I could have stopped this movie at any time and I didn’t. I kept willing it to get better. I thought I might warm up to it. That maybe I was just nervous, and it couldn’t possibly be this dull. But it was. Lesson learned. You gave me cinematic blue balls once, Captain America. Shame on you. I will not be going back to his place for “coffee” any time soon.