This movie is more high-noon western than high-octane thriller, but there is indeed a heist at its heart. 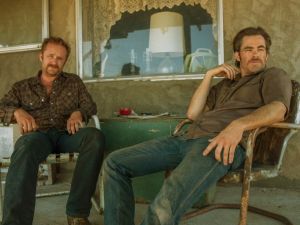 Foster), have little in common except for the rough past they come from, which they are both desperate to escape. Toby has spent the last few years caring for their mother while the family ranch slips away. Tanner has spent the past year since he’s been released from jail tempting the fates to put him back. Now they’re working together to save the family ranch from default – and will do so by robbing a bunch of Texas Midland bank branches, and paying the bank back with its own stolen money.

The only catch: sheriff Marcus (Jeff Bridges) is close to retirement but not keen to go, and this one last case is not going to be the blemish on his career. He chases the brothers all over Texas until he pinpoints the next branch they’re about to hit, and lies in wait.

Hell Or High Water is superbly acted. You can’t even say with certainty which of the three leads steals the film, but they’re all making the right choices, the quiet choices that make for the most interesting of character studies. That said, the secondary characters – and hell, even the one-liners – are all praise-worthy here. And I am obliged, once again, to worship at the altar of Jeff Bridges, chronically underrated but truly one of the wonders of the world.

The pace helps set this movie apart. It’s not fast or furious: it blows by at about the speed of a tumbleweed in a gentle breeze, which means you have time to get to know everyone,

and in getting to know them, maybe you actually care. There is a certain sympathy accrued for both the cops and the robbers. It’s the kind of movie that made the car ride home extra engaging, as we figured where they all stood on the Bad Guy Scale. Toby, for example, is robbing the bank that robbed him. He’s doing it to give his kids a future. But he’s using a gun, which means people could get hurt. So is he good, bad, or somewhere in between? 49% good? 51% good? 75% relatable? 100% justified?

One thing’s for sure: the blackest hat of all is reserved for the banks. The Big Short was last year’s testament to the American Dream’s foreclosure, and although my hat’s off to Adam McKay for making a narrative film out of a nonfiction book (and I don’t mean a biography – this baby was characterless, plotless, and read more like a textbook, by which I mean full of facts and figures, but not remotely dry or boring), it never really resonated with me. Hell or High Water puts a name and a face to poverty, and calls it a disease. An epidemic, even. Director David Mackenzie has accomplished something significant here, dragging the good old Western into the 21st century, a time of economic anxiety, where the little towns look even more derelict and neglected than they did in the wild, wild west. There’s an ache to this film cultivated by fantastic dialogue and scenic shots, handily catapulting itself into my top 5 of 2016.

28 thoughts on “Hell or High Water”