Young Canadian Rosie Ming has kept her interest in poetry a secret so her grandparents and best friend are shocked when she announces that she has been invited to a poetry festival in Iran. Though she can’t help wishing that the festival was in Paris instead, Rosie soon discovers that she has a lot to learn from her fellow poets from around the world about ancient Persian poetry and her own family history.

Of course, some of my favourite movies are animated but I am realizing lately how little I know about animation itself. I know very little about the different styles of animation and wouldn’t know how to go about describing the look of this film.

Luckily, I have some stills. 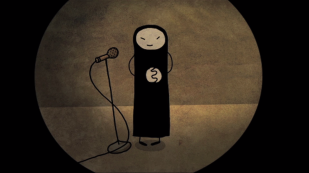 Window Horses is as much a story about multicultural identity as it is about family. Rosie was born and raised in Canada to a Chinese-Canadian mother and a Persian father. With her mother now deceased and her father now estranged, she knows very little about either family’s heritage. When asked about her father, she has only one thing to say “My father abandoned me when I was 7”. As she starts to realize that nearly every local she meets in Iran seems to know him, she is forced to revisit the oversimplified story she’s been telling herself about her father.

Yes, the resentments we hold on to, maybe especially when it comes to our own family, are more complex than we let on. We’ve seen this before in movies and I did find the family drama a little played out and predictable. Thankfully, Window Horses has a lot more to offer than just a mystery surrounding Rosie’s family. Window Horses works best when it shows us the transcendent power of art. Rosie spends a lot of the movie discovering Chinese and Iranian culture through poetry and barely even needs to speak a word of Mandarin or Farsi to relate to the words. German, Mandarin, French, and Farsi verses are all brought to life with some beautifully creative animation all without a single subtitle. It is the film’s most brilliant device by far.

Window Horses may drag a little when it relies too heavily on exposition  and voice actress Sandra Oh is badly miscast as Rosie but, for the most part, director Ann Marie Fleming has made quite a nice film. Its unique sense of humour and literally poetic animation more than make up for its any minor complains I might have.