All I See Is You is a movie I wish I could unsee.

Blake Lively plays a woman blinded in a childhood accident. Her husband dotes on her, and in the first few scenes of the movie, director Marc Forster wants to experience her perceptions. Film is of course a visual medium, but as she and her husband have sex, we focus on different sensations – on the 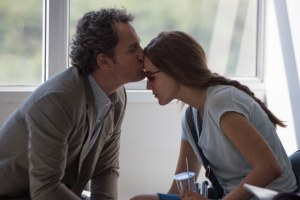 sheets, on his hands, their breathing, the sounds drifting in from outside, the memories that keep cropping up. It’s a strong enough start but when she becomes a candidate for surgery that would restore her eyesight, things start to shift.

The story shifts. It’s not just her life that changes as a seeing woman, but his as well. Both struggle to redefine themselves. But now that her vision is restored, I found the film harder to follow. In fact, I didn’t follow it. Afterward, momentarily blinded by the sun upon exiting the dark theatre, Sean and I compared notes and found that neither of us could account for some strange occurrences in the movie. I was willing to believe that I was just tired and bored and inattentive, but since both of us failed I’m more inclined to blame it on bad film making.

As Blake’s vision begins to focus, she sees cracks in her marriage. Neither she nor her husband (Jason Clarke) could have anticipated the cobwebs they’d find in the corners of their relationship. And as much as she’s maybe not digging the dynamic in her marriage, she’s definitely into what she sees in the mirror! A dye job and a push-up bra are top priorities, and I’m sure her corneal transplant surgeon (Danny Huston) feels very gratified. The film continues to present images that are a little surreal, paired with incongruous sound that represent the disparity in her experience. Some of it is a little too obvious and some of it’s way out of left field. Like if you take a left at the hot dog cart behind left field, keep going pass the overflowing garbage can with all the bees buzzing around it, and head for the 3rd red Buick in the parking lot, that’s maybe where this stuff came from. And that’s me being generous because in my hard little heart I still believe some of this stuff was slotted in just to see if we were paying attention.

Her husband definitely prefers her submissive and dependent, and things crumble when she’s suddenly strutting her hot stuff all by her lonesome. But I can’t quite feel a lot of empathy such a vain and selfish character. There’s nobody here to root for, not even the dead bird stuffed mysteriously down a glass bottle in the refrigerator (?). I don’t think there is any saving this movie, but Lively definitely doesn’t have the chops for it. If I’d had an inkling that Sean was finding All I See Is You just as painful as I was, I would have organized a walk-out.