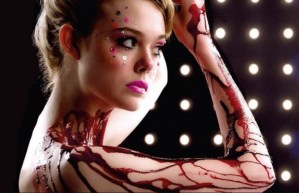 starts believing it, truly believing that her beauty is important and holds power over other people, that’s when things start to bubble.

Elle (she has some other name in the movie, probably) has recently arrived in L.A., the city one goes to when one has legs for days. She’s ripe for the picking. When things come easily for her, she buys into it. As you can imagine, this makes for lots of pretty enemies. Pretty, but not pretty enough. They’re no longer the Pretty Young Thing of the moment. She is, so she becomes their hate suck. Luckily, model types excel at verbal abuse but are just too weak from hunger to be much of a threat.

This movie is by Nicholas Winding Refn, the sick and twisted dude who came 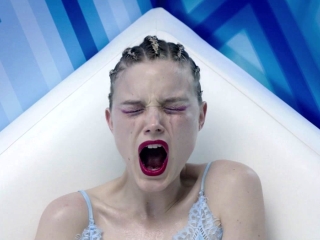 up with that head-stomping scene in Drive. And all the other scenes in Drive. I described Neon Demon to Sean as “less plot than Drive, and with super models” and also as “this year’s weird movie” to which he replied “Beasts of the Southern Wild weird?” and I answered “No, more like High-Rise weird.” More like weird weird.

This is a polarizing movie that you’ll either love or hate. Or, if you’re like me, 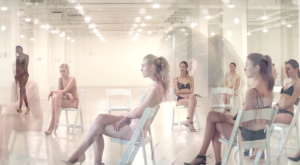 not really either of those two things. Surprise third option! I definitely didn’t hate it. Lord it has some of the coolest images I’ve seen in a film, ever. Gorgeous. Stunning. It’s one of the boldest things I’ve ever seen on film and I’m giving lots of credit to Refn’s cinematographer Natasha Braier (what! a female cinematographer??) Together, Refn and Braier create an unforgettable world that is hyper-real, extreme in both its beauty and its grit. The colour palette tells a story all on its own, progressing seamlessly from beginning to end.

And I don’t really mind it being plotless. The sparse storytelling just mimics the vacuousness of the girls. But it’s not just symbolically shallow;  I just also 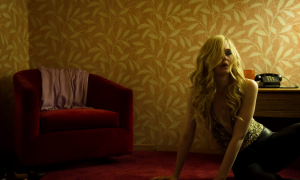 found it to be kind of empty. Like there’s obviously an allegory here, about our culture’s emphasis on female beauty, and on a certain kind of white girl skinny beauty in particular. And the dangers of narcissism. And female cattiness, which I almost hate just on principle. But this movie didn’t make me think. Like, at all, beyond “Oh, that’s gross.” So treat it like a high fashion magazine with pretty pages to flip through. I just can’t give it much more credit than that.