A sex addiction therapist endures a severe kick in the nuts that leads to a hospital visit, that leads to the discovery of a brain tumor. That’s the good news. The brain tumor is benign, and has been leaning heavily on his pituitary gland this whole time, which means 30 year old Peter (Johnny Simmons) has NEVER gone through puberty. Buckle up, folks: he’s about to! 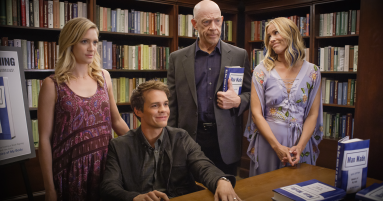 Year Old Virgin, and the fact that Jane Lynch is in both is just a painful reminder that this subject actually CAN be funny, should be funny, and in fact probably took a lot of effort to screw up this badly. How much effort, you ask? Well, by my count: there are 2 credited with “story by” and FIVE credited with screenwriting. Five! All dudes, naturally. Dudes who like visual jokes about morning wood and sneaky semen. And that doesn’t even count the guy who wrote the book, you know, the REAL guy that this actually happened to.

His name is Ken Baker. The real dude spent one season as pro hockey’s “oldest rookie” and is a “journalist” who has worked for People magazine and the E! network. He is not and never has been a sex therapist, which is an unnecessary layer added by lazy writers who thought it would be funny and in fact is just plain stupid. How someone smart enough to earn a PhD would refuse to see a doctor about his condition but deem it a good idea to give advice to people about an act of intimacy he’s never done himself and is in fact biologically incapable of completing is just unacceptable. Do not insult me with such stupidity.

If you surf by this one on Netflix, don’t be fooled by the recognizable cast. It is not worthy of your time. It will fail to incite a single laugh. It should be flushed down the toilet like a used condom.

9 thoughts on “The Late Bloomer”