It’s timely and potentially divisive subject matter that will surely be attacked in many online comment sections as Liberal Hollywood Elites trying to take your guns away. But, honestly, can’t we use a rational discussion on gun control right now?

Well, you won’t find any of that here. Neither Sloane nor her opponents are particularly interested in facts or rhetoric. They are masters of spin, manipulation, and trickery. Never mind guns or politics, this is really a movie about sleight of hand. It has more in common with movies about magicians, con artists, or thieves  than movies about politics. 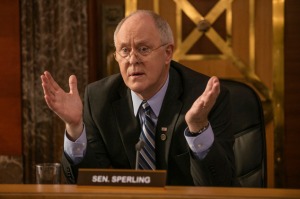 And maybe this is supposed to be the point. The only problem is that and Miss Sloane (the movie) seems to love the thrill of the chase as much as it claims to be outraged by her methods. For awhile, this behind-the-scenes look at what it takes to pass a bill in Washington (or keep one from passing) is almost fascinating and thought-provoking but the endless double crosses and Sloane’s nearly superhuman foresight make it harder and harder to take any of this seriously.

Needless to say, Chastain is pretty much the best thing about the movie. Any insight

we get into her character comes more from her performance than Jonathan Perera’s script. But even she occasionally fails to convince during some scenes where she seems to be acting more for the trailer than the actual film. I can only assume director John Madden is to blame for this given that Miss Sloane also showcases inexplicable overacting from the likes of Michael Stuhlbarg, Sam Waterston, and Mark Strong that I can’t believe made the final cut. You’d think  a director of a Best Picture winner (Shakespeare in Love but still) would have done a better job of reining them in.

Madden may have had trouble keeping control of his hammy cast but he still manages to make a watchable film. It is slickly edited and never boring. And I have to admit, its most outrageous twists are the best ones. It just feels like a bit of a missed opportunity.

Maybe I shouldn’t complain. I knew almost nothing about this movie going in and expected something serious and dry. I was anticipating a chore and got a preposterous guilty pleasure that I’m still trying to forgive myself for kind of liking.