Are you in the mood for a creepy Christmas movie? Not murderous abortion creepy, worse: lecherous\incestuous\underage creepy.

Nick’s brother has recently become a trophy husband. His rich wife is hosting Christmas dinner for her 2 kids, her new and improved (and needless to say younger, and useless) husband and Nick the alcoholic brother (Brian Posehn) is invited, against everyone’s better instincts, as well as Nick’s sister and her podcasting husband: a real blended-family Christmas. Nick’s sole goal, besides soaking in gin, is to fuck his new niece. Merry Christmas to all, and to all a good night!

Set in the dumpster fire that is Cleveland Ohio (sorry Cleveland, it’s only sort of personal: 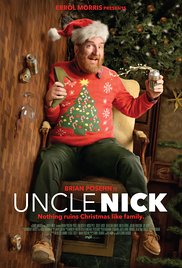 the last time I visited it was for massive surgery, which naturally didn’t leave me with a fond impression), the Christmas festivities are twinned with a retelling of 10-cent beer night at an Indians game back in 1974. That’s a real baseball game where the drunken fans rioted and mayhem and nudity and violence broke out and the game had to be forfeited and abandoned: not a “traditional” Christmas pairing. It can’t have looked right even on paper but in practice it’s downright untenable.

I suppose this was meant to be a raunchy comedy, only someone left out all the comedy. We never truly know any of the quirky characters either, or how any of them consented to spending the holiday in such an insufferable way.

I can’t think of a single nice thing to say about this movie, so instead I’ll dig deep and say something nice about Cleveland: while you’re there, you can visit the house used in exterior shots of a monumentally better holiday movie called A Christmas Story. Watch it. Watch it again. Even if it’s the 20th time you’ve seen it (even if it’s the 20th time this year!) it’ll still be a better experience than even 5 minutes with slimy Uncle Nick.