It’s haunting and beautiful and tragic and oddly seductive. The Red Turtle is the prettiest girl in your class who also happens to pull down straight As: fecking brilliant. I wasn’t sure if it would even earn girl next door status with me – an animated film with no dialogue?

While The Red Turtle has no speech, no words at all, it is far from silent. It has lovely but 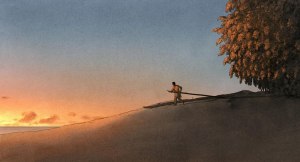 retiring music throughout, but manages to speak directly to your heart. That’s sort of the catch with this film, you have to let go of the normal film-going experience, and just feel your way through this one.

A man is lost at sea and washes ashore on a deserted island. He makes several escape attempts but his rafts keep getting destroyed. The culprit turns out to be a red turtle, a turtle who just happens to have the power to die and come back a woman, which is a pretty cool power. Imagine how stoked the dude is – doomed to a solitary life but then magically accorded a mate?

Director Michael Dudok de Wit had only a few short films to his name when he got a call from animation superstar Studio Ghibli asking if they could distribute his 2000 short Father And Daughter in Japan, and oh, p.s., would you make a feature film for us? He was floored. Ghibli has never done a non-Japanese film before, but they were clearly entranced with Dudok de Wit’s style and talent. The result, La tortue rouge, is pure visual narrative. It’s extremely simple story-telling, but effective. It laps at you like waves on a sandy beach. Cumulatively, it can knock you off your feet. This may be Dudok de Wit’s first attempt, but he nonetheless has an Oscar nomination to show for it.What do I have? I have a teeny tiny shadow on my heart – a shadow in the shape of a red turtle sliding back into the ocean.

12 thoughts on “The Red Turtle”