Tom (Jason Segel) and Violet (Emily Blunt) met at a New Year’s Eve make-up-your-own-superhero party one year ago. On their anniversary, he gets down on one knee and proposes. It’s romantic and sweet and perfect in a way that only movies can pull off. The

engagement is easy and wonderful, and their engagement party is infuriatingly better than most people’s weddings. But then things get messy. Her sister (Alison Brie) hooks up with his best friend (Chris Pratt), and then Violet gets accepted at her dream school and a move is on the horizon. The wedding gets postponed.

What was your engagement like? When Sean proposed, he got down on his knee on a beach in the Bahamas on our 6 month anniversary. It was lovely. But until this week, I’d assumed that though he did the asking, I’d done the initiating. Hadn’t we decided to marry months before that? And hadn’t I been voicing some impatience? Turns out, Sean didn’t remember it like that at all. He didn’t even remember that I knew the proposal was likely – that we’d ring-shopped together, in fact. He was still worried I’d say no! We were engaged for a year, which is longer than Ms. Impetuous (that would be me) would have liked, but I had a sister and he had a brother that already had save-the-dates in the calendar year. So we waited our turn and spent the time planning the perfect wedding and attending some close runners-up. We also almost broke up (the birth of his first niece had Sean questioning whether my no-baby stance was right for him) and then almost couldn’t marry whether we wanted to or not (did I mention I was still technically married to someone else at the time? Divorcing crazy people is hard!) but in the end we got to legalize this bitch and recently celebrated 6 years of matrimonial togetherness.

Violet and Tom had a bumpy time too. Life doesn’t always make it easy on us. Jason Segel 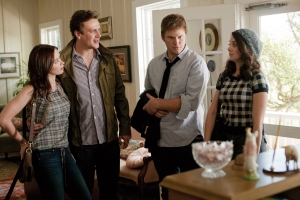 had to lose 35lbs to even pretend to be good enough for Emily Blunt. They have great chemistry together, and you believe in their imperfect relationship. The jokes land, but so do the more sobering moments, the ones that remind us that when relationships work, they’re transformative, and when they don’t, they’re soul crushing.

Unfortunately, The Five Year Engagement is overlong and occasionally falls back on some pretty tired cliches. But I’d still consider it worth a watch, despite its flaws, even if it had me wondering what this movie would be like with Chris Pratt in the lead rather than playing second banana. The astounding supporting cast probably contributes to this movie’s bloat, but also adds to its charm: Kevin Hart, Mindy Kaling, Mimi Kennedy, Jacki Weaver, David Paymer, Jim Piddock, Rhys Ifans, Kumail Nanjiani, and Chris Pratt all steal scenes. Not everything in this film is brilliant, but it does manage to find some truths along the way, which I suppose is not unlike a marriage: it could be improved with some editing, but isn’t that life?

20 thoughts on “The Five Year Engagement”