Ray (Pat Healy) is an unconventional entrepreneur: he runs a simulated kidnap business where he abducts people and holds them hostage for as many hours as they’ve paid for. He thinks he’s hit pay dirt when a beautiful young woman (Anna, Taylor Schilling) is willing to pay for a whole weekend’s worth of captivity and is prepared to throw in a little extra for some rough stuff.

But Anna’s abduction doesn’t go as smoothly as all the others: someone’s reported her 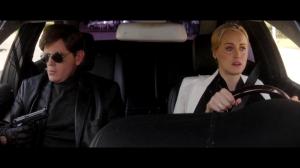 disappearance to the cops, for one thing. And Anna’s claiming that whoever hired him, it wasn’t her. So now her kidnapping is for real, Ray’s in trouble with the law, and he can’t let her go until he sorts it all out. Too bad Ray’s not exactly the brightest bulb. Bumble, bumble, bumble.

First time director Pat Healy creates an interesting atmosphere that’s half tension, half farce, and the two leads toe the blurry line well together. It took me a while to get into this because it’s not your typical crime thriller; Ray is not a criminal mastermind, he’s actually just not very good at his job. Tonally, you might find it more in the vein of Mindhorn than Taken. It’s quirky, there are some great gags, the character study is fascinating. It explores this seedy fantasy\role play underground culture while keeping a fairly light, jovial tone. But at 83 minutes, it also feels like it’s stretching to make an interesting premise into a feature-length idea. It feels thin in places. So while it’s an interesting experiment in film, it doesn’t quite work the way you wish it would.