To be honest, it took me a while to adapt to the pace of this movie. It is slow, deliberate, and very measured. There’s no getting ahead of yourself. But the unusual story and glimmers of humour hooked me and I was glad I stuck it out. Free and Easy is genuinely something that feels new and unique.

It’s about a “soap salesman” who never sells a single bar but does encourage people to sniff his product (“a different scent on all 4 sides!”) because doing so induces loss of consciousness. Once his would-be customers are asleep on the ground, he frisks them for money and valuables. So he’s really a thief, posing as a salesman. 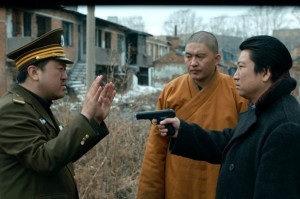 Director Geng Jun shows us a side of China rarely seen: crumbling, bleak, all but abandoned. This cold, deserted, post-industrial town in northeastern China is dotted with rural characters, and they’re all as shady as the salesman.

It almost watches like loosely connected vignettes, a series of petty crimes where corruption and lawlessness is the new normal. But whenever these criminals encounter each other, you can’t help but laugh. The humour is deadpan but it landed surprisingly well for a movie that runs the risk of being lost in translation. There’s some slap stick, which I suppose is universal, but really it’s just the contrast between this totally depressing setting and the buffoons that populate it that just works.

The film is minimalist but that doesn’t mean there isn’t a lot of attention to detail poured into each shot. Out-of-focus details often sharpen into the butt of the joke. You have to stay alert to small gifts planted by the director along the way. Sure the subtext of the film is a little depressing, but it’s delivered in such an obliquely funny way, the message presented by sliding it in sideways, that you’ll laugh appreciatively at things that aren’t even overtly funny. In a film full of grifters, it’s the cops who are the dirtiest  of them all. That’s the lens through which contemporary, provincial China is explored in (ironically titled) Free and Easy, and the film stays remarkably on-brand.

6 thoughts on “Free and Easy”