Sean and I are in Venice for the Venice Film Festival. Last week we saw and loved Guillermo Del Toro’s The Shape of Water, which had us appreciating not only the lushness of the period (circa 1962, I believe), but also Del Toro’s refusal to completely excuse it. The 1950s are often given the nostalgia treatment in movies, coated in a thick gloss of fond memories with a healthy dose of forgetting the grim realities. This is a time period that inspires idiots to spout slogans like Make America Great Again, because that time period was actually quite bad for quite a lot of people. Del Toro’s film included some subtle nods to that fact, but Suburbicon is the movie that blows the lid right off it.

Suburbicon is the name of a town founded on the principles of an idyllic setting with all the conveniences of the city but none of the sordidness. The sprawling neighbourhoods 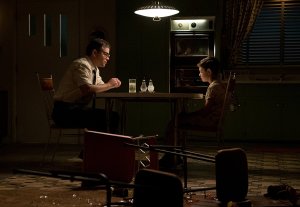 are safe, the schools are good, it’s a great place to raise a family. Except if you’re the Meyerses, who just moved in. They’re not welcome (being black and all). They’re apparently the very people all these “nice” white folk have moved away from the cities to avoid. The Meyers don’t do a darn thing to incur the slightest ill will, except have a darker skin tone, but still the wrath of the townspeople is rained down upon them. Determined to force them out, their white neighbours harass them and abuse them and generally make such a ruckus that no one notices the neighbours directly behind them.

In that house, Gardner (Matt Damon), his wife (Julianne Moore), his wife’s sister (also Julianne Moore), and his young son Nicky are being held hostage in a bizarre home invasion that leaves one dead and the whole family shattered. It’s just the beginning of a bloody series of events that get more and more lurid. It’s so suspicious that an investigator (Oscar Isaac) shows up at their door. But everyone else is so busy with their unrequited race war that no attention is being paid to the white family wreaking havoc.

It’s exactly the kind of satire-caper at which the Coen brothers excel. Incompetent criminals seem to be their specialty. Frequent collaborator George Clooney joins not only as a co-writer but as the director. He’s added a layer of social consciousness with deep, resonating roots. Suburbicon is slick and it entertains you to within an inch of your life. The cast is wonderful, and Clooney, being an actor’s director, elicits a startling performance out of Matt Damon, and a sterling one out of young Noah Jupe. This black comedy earned a lot of laughs at our screening – seemingly the darker things got, the more we laughed out of anxiety and relief. But this is a brutal story that rewards people justly for their crimes. At first it may seem like we’re flipping between two different movies – the obvious and the absurd – but upon reflection, I like what Clooney’s done with the juxtaposition.

Suburbicon is a little wild, a little uneven, but a whole lot of fun. It’ll be hitting theatres late October.