Kyle (Liam Hemsworth) and Swin (Clark Duke, who also directs) are bottom-tier drug dealers who are glad to be promoted to wholesale distribution by their kingpin (a man they’ve never met).  They are on their way to their first wholesale dropoff when they’re suddenly rerouted by Ranger Bright (John Malkovich) to his trailer park in Arkansas.  Bright also works for the same kingpin, who apparently has reconsidered Kyle and Swin’s promotions.  Kyle and Swin try to settle into the Arkansas chapter of this drug ring, but things soon go sideways when a rival lowlife follows them back to the trailer park after their first drop-off, and his robbery attempt leaves two people dead. 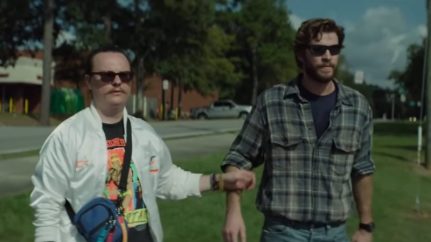 Vince Vaughn and Vivica A. Fox also make appearances in Arkansas as Kyle and Swin make enemies at every turn.  The saddest part is that their attempts to lay low end up creating, then escalating, a conflict between them and Frog, who can’t figure out whether the two are trying to steal from him or whether they are completely inept.  As with most things, the answer ends up being a bit of both.

For the most part, Arkansas is a character study, which is highly problematic when the lesser Hemsworth is your lead.  Liam’s brother Chris clearly got all the family’s charisma, and Kyle’s only observable character trait is an unexplained limp.  All in all, there’s really nothing coming from Hemsworth to keep the viewer interested.  Swin is not worse but he’s hardly better, as he remains a complete mystery through to the end, leaving Hemsworth to carry most of the load.

Casting better lead actors may not have saved this one, because the film’s ending is a jumbled mess as all those left standing must fight for control of Frog’s drug ring.  But with better leads, Arkansas would at least have been a more interesting journey.  As it stands, Arkansas is a boring film with no real payoff.  I would much rather have followed the supporting characters’  stories (especially Ranger Bright) than have to spend so much (or really, any) time with Kyle and Swin.