Guys! The Hallmark channel has FINALLY taken American’s temperature and figured out what’s been missing in your pathetic little lives: year-round Christmas movies!

Like every holiday movie worth its eggnog, October Kiss has a workaholic widowed 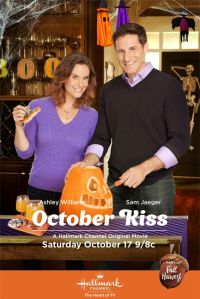 father, Ryan (Sam Jaeger), who is so overwhelmed by his kids and his work and his not having a wife he hires a nanny, Poppy (Ashley Williams – who you will recognize from VARIOUS Christmas movies), whose only qualification is tin foil improvisation (Sean notes she’s clearly never bought tin foil before, doesn’t know the value of it, especially post-tariff).

Anyway, Poppy’s mission is two-fold: win over Ryan’s kids, who think nannies are bummers, and make Ryan fall in love with his kids again. And she’ll do it all using autumnal events: pumpkin patches, harvest festivals, Halloween decorations, leaf piles, even baking cookies, which is a bit of a stretch, but how else to work in the adorable detail that she “doesn’t believe in measuring” AND have him wipe the flour that has inexplicably, though quite adorably, ended up in her hair.

Anyway, in holiday movies, workplace sexual harassment policies must always be pushed aside in favour of the employee and employer falling dutifully and predictably in love. And that’s not the only rule in the employee handbook they’ll break. Poor Poppy is working 20 hour days (it’s always hard to compete against the perfect memory of a dead wife’s ghost) – I’d almost feel sorry for her, except she sticks around even when Ryan is home, in order to be the third wheel on his date. Tis the season!

Will a boy overcome his arachnophobia through the magic of ingeniously on-the-nose Halloween costumes? Could the inventor of the Food With Friends app ever be happy with a nanny who equates kids with Japanese CEOs? And doesn’t an app that matches single diners with other single diners to save them the embarrassment of eating alone sound a lot like Awkward Dinners With Strangers? If you’re needing a little more pumpkin spice in your life, and just a little less dignity, why not October Kiss – streaming now on Netflix.