Thank you New Hampshire Film Festival for bringing this beautiful film to us. We missed seeing it at TIFF and it got huge buzz. HUGE. Director Sean Baker is following up his crazy-good Tangerine and we’ve been collectively, societally waiting with baited breath for his next effort. It feels like Sean Baker is doing important work without all the trumpets and majorettes and fanfare. But I sort of hope that maybe I can blow the horn a bit here, wave a flag or two: The Florida Project is fucking awesome.

6 year old Moonee has the run of the crummy Orlando motel where she and her mother live in “extended stays.” Halley, her mom, can’t get work at Disney and has no other 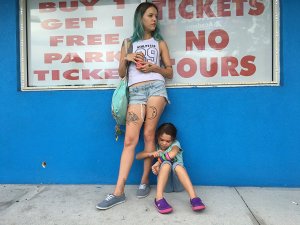 options, so you can imagine some of the crazy things they do for money. It’s a destitute, desperate kind of life but you’d never know it to see Mooney adventuring around free-range with her comrades.

Sean Baker is a master of society’s fringes, and the near-homelessness of the people constantly scrounging for rent between scrapes with the law or family services is about as marginal as you get. Situate that beside the self-proclaimed “happiest place on earth” where the wealthy tourists stay in much nicer digs and it’s an uncomfortable reminder that the rich get richer and the poor get poorer.

Moonee, meanwhile, is seemingly untouched by her circumstances. Intellectually, you know it’s not true: that of course she’s affected by what she sees and hears and eats and meets and experiences, and that she’ll find it hard to climb above her mother’s station. But for now she’s a happy-go-lucky kid who rarely faces consequences, although that’s largely thanks to the motel’s manager and de-facto babysitter, Bobby, who is the eyes, ears, caregiver and mediator when parents just aren’t up to snuff. And believe me, this is a building where neglect rules the day. I felt real tension watching these kids be unwatched.

Halley, barely more than a kid herself, and scarcely more responsible, is tattooed with bad decisions but not without sympathy. Bria Vinaite, who plays her, really understands Halley’s sharp corners and soft underbelly. Willem Dafoe gives Bobby a complexity and edge that make his character fascinating. He’s like the beating heart of the building he supervises. But it’s little Brooklynn Prince as Moonee who just about steals the whole gosh darn movie. She is so real and raw it often feels like you’re watching a documentary, and that the stakes are indeed life-altering. Child actors can make or break a movie but Sean Baker has found not one but a trio of incredibly spirited, natural, and talented kids that make this movie what it is.

The Florida Project is audacious, authentic, absorbing. And it’s begging to be watched.

18 thoughts on “The Florida Project”