We encountered all kinds of interesting documentaries at the Planet in Focus film festival, but I’m admitting a soft spot for 24 Snow.

I have a passion for documentaries anyway. A camera can actually be a transportation device, carrying us away to a world that looks and feels entirely different from our own. Sometimes the lens looks upon a piece of fiction that’s been created to jar your senses (like Blade Runner 2049), other times it encourages you to take a second look at something that’s quite familiar (like The Florida Project), but documentaries can do both while actually reflecting real life back at you.

24 Snow isn’t fiction but it definitely felt foreign to me, and its foreignness informed me on a world I knew little about. With this documentary, we travel to the Siberian Russian territory of Yakutia. I didn’t know there were Russian Inuits, yet there they 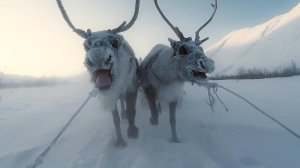 were, surviving in that beautiful but frigid (-70C) land. We are introduced to one main in particular: Sergei is a horse breeder, and even his horses will look strange to you. The Yakutian horse has of course evolved to weather the icy temperatures. They are small but sturdy animals, with shaggy coats that hopefully keep them warm. Their thick hair and manes are not unlike those of Shetland ponies but when you see one completely coated in ice, you know you’re in unfamiliar territory. The breeders de-ice the horses the way I de-ice my windshield. It’s a way of life I can’t really comprehend: solitary, isolated. No telephone, no electricity. No cash. No cars (none that can run you through ice and snow anyway – sleds get the job done).

These harsh conditions are a real test of one’s limits and it’s interesting to get to know the kind of person this job attracts. I live in Canada and am not unfamiliar with snowy, even permafrosted terrain, but the Yakutia is something else entirely. It’s stunning if you can separate it from its harshness, and the lush cinematography here certainly helps. The people and beasts of 24 Snow completely captivated me; it’s a fascinating documentary by Mikhail Barynin that’s as informative as it is beautiful.