Flynn McGarry, 15 in the documentary, has been “cheffing” since he was 10. I’m not talking about peanut butter toast, this kid is the real deal, sourcing ingredients most people wouldn’t recognize as food, preparing it in ambitious ways, plating it with finicky precision to detail. His mother Megan, once a film documentarian herself, has no shortage of home video of his meteoric rise to culinary stardom, and this film uses that footage liberally. We see him hosting a 12-course “supper club” for family friends in his home at age 13, with a kitchen full of children to do his bidding, and transitioning to professional pop-up restaurants in New York, with trained staff underneath him, just a few short years later. 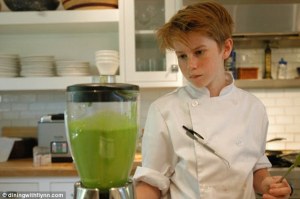 Cameron Yates focuses on the unusual relationship between mother and son. Meg McGarry allowed her son to drop out of school to focus on his passion. Now, nearing 16, he’s ready to move away to pursue his career. As a mother, we see helicoptering, permissiveness, indulgence, and an incredible amount of creative nurturing. But we also find a woman who has lost herself in her son’s shadow. Pursuant of her son’s great passions, she’s forgotten hers, and now that he’s ready to leave her behind, what will become of her?

Yates shows a little of the familial friction but that’s as far as he’s willing to go. This is otherwise about as thoughtful as any home video: with almost no input from outside the family, it’s hard to judge how good Flynn really is, or what place he has among top chefs. Plenty of pro chefs balk about even calling him a chef, but we never get to hear from the opposition. I think his talent and enthusiasm are in earnest, but the truth is, this is a privileged white kid whose parents indulged his whims and bought him his biggest dreams. His childhood bedroom housed more high-end appliances than my grown-up kitchen. He hasn’t paid any dues. He didn’t have to work for this. Chef Flynn is interesting, but it’s a one-sided story, all sweet with no salt, which any chef should know makes for a boring meal.