It’s cupid day. High school student Sam, goes to school with her friends, where they all receive some mystery roses, plan for Sam to lose her virginity to boyfriend Rob later that night, and hit up a party where they drink, predictably taunt an unpopular girl. Then they get in a car and drive home. Only they don’t make it. There’s an accident, and when Sam wakes up…it’s the morning of the same day again. Cupid day is getting the Groundhog Day treatment. 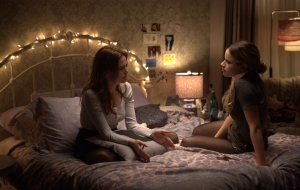 By the third day she’s trying to live differently, to do things “right.” But even when she manages to avoid the accident, she still wakes up on the same morning and lives the same day. Sam (Zoey Deutch) is half right. Her ‘perfect’ life is a mystery that needs unraveling, and she’ll have to start questioning everyone and everything in it before she can begin to make adjustments. Sounds predictable, doesn’t it? I didn’t think much more highly of the book, so I wasn’t exactly in a rush to see this movie.

It’s not bad, it’s just not meant for me. This is a story intended for young adult audiences, and I guess that makes me an old adult. I’ve seen the real Groundhog Day. I remember how it counterbalances its existential angst with dark humour. This one takes itself very seriously, so it dips into melodrama, the familiar milieu of so many high school soaps. And you know, forgive me for this massively unfair comparison, but Zoey Deutch is no Bill Murray. It’s hard to make repetition feel cinematic. Feel anything but boring. But for Murray, even a twitch of the eyebrow can make a scene feel transformative. In the case of Before I Fall, Deutch doesn’t even feel well-cast as a high school student (she’s 24, but seems older than her same-age castmates). And the voice over is really just a big stick with which to beat us over the head with the message, which the director apparently does not trust to absorb otherwise. It’s actually not that deep. I think we would have managed, but now we’ll never know, unless tomorrow she wakes up and has to make this movie over again and again until she gets it right. Let’s just hope I’m not stuck in my own time loop, having to watch them.