Earl, an ex-soldier, has a junkie wife and two kids and no legit way to make them a better life. The only thing he’s ever been good at is fighting, and as luck would have it, there’s a slim chance he can turn that into some cash. Donnybrook is offering up $100k to the winner of a massive, no rules cage fight. All you have to do is be the last one standing. $100k will buy a home for his kids and treatment for his wife, but he can’t even afford the $1k entrance fee. So he robs a gun store where he’s known by the owner – it’s not a perfect crime, but Earl (Jamie Bell) isn’t exactly the sharpest tool, nor does he have to be in this shit town.

On the road to Donnybrook, Earl’s story will intersect with Delia and Angus, a brother-sister drug-dealing team with a questionable relationship, and the cop who’s pursuing 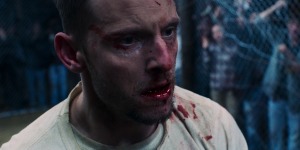 them. Lots of crazy things are going to happen. LOTS OF CRAZY THINGS. I can only hope to prepare you fractionally for the craziness that’s about to be unleashed. I was not prepared at all. Some films at a festival are hardly finished. Lots don’t have trailers yet, or even production stills. Lots will go on to be re-edited so their final, released-in-theatres version will look wholly different that the version I saw at TIFF. Donnybrook felt finished but little was known about it. The only synopsis available simply states that “two men prepare to compete in a legendary bare-knuckle fight.” I thought I was sitting down to a boxing movie, not a HOLY SHIT WHAT THE FUCK JUST HAPPENED movie, and I shouted that more than once. More than twice!

And it’s not just the gratuitous violence. There’s some pretty freaky sex stuff too. The drug-addicted wife is likely the only one headed for treatment, but she’s only the fourth or fifth most in need of it. There isn’t a healthy person for miles, and if there was, they’d probably be killed just for their car keys. Donnybrook is dark and violent and brutal.

Tim Sutton seems to want to give a voice to white rage in middle America. They’re poor, they’re addicted, they’re abused. And they’re racist, xenophobic pieces of shit, though Sutton seems to excuse that, and revel, even fetishize their anger. Which isn’t to say it doesn’t exist or isn’t a problem, just that Sutton contributes to the problem without saying anything intelligent about it. If he cared about these “marginalized” people, he wouldn’t make such caricatures out of them.