Jared is a good guy. He goes to church with is parents, where his father is the pastor. He plays on the high school basketball team. He’s kind to his girlfriend. But when he gets to collage, the world isn’t quite so good to him in return. He makes fast friends with a fellow runner, but that leads to a surprise sexual tryst one night that the other guy can’t live with. So, he tries to destroy Jared’s life, forcibly outing him to his deeply religious parents.

Jared (Lucas Hedges) respects his parents (Nicole Kidman, Russell Crowe) so he goes to gay conversion camp as instructed, in the hopes that they can turn him straight.  Conversion therapy is nuts. I mean, it just is, on principle. What kind of whack jobs really believed this would work? And what kind of whack jobs wanted it to? It would almost 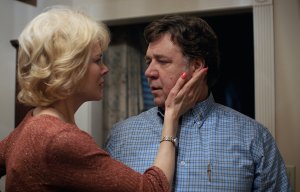 make a handy queer dating service, as it is probably the biggest concentration of homosexual folk any of these kids has seen before, if it wasn’t so nasty and abusive. That’s what it really boils down to. The head instructor, Victor Sykes (Joel Edgerton), blames your “problem” on some member of your family who made you gay. He wants you to pick someone to focus your anger on. He wants you to learn to “act” “straight” (did you know that the triangle is the straightest shape?). He focuses on behaviour – if you stop playing football, you are no longer a football player. Problem solved.

I mean, this whole thesis feels strangely out of date. Why is Hollywood still trying to convince people that gay is okay? I think societally we’ve moved past this point, except all these scripts that have been languishing for years are only now getting produced, and they’re already obsolete. You have to check out indie cinema to see some truly of-the-moment lgbt themes. But okay, gay conversion therapy is a horror. Of course it is. But the thing that’s great about Boy Erased is that Jared is such a strong character. Everyone and everything in his life is trying to make him feel wrong and ashamed and dirty, but he doesn’t. When he confirms to his parents that he thinks about men, he knows it goes against everything they believe, but it doesn’t seem like he’s internalized that self-hatred. It can’t be easy, in that house particularly, to know that his very being is not only repugnant but blasphemous to the people he loves most. And yet when he consents to the therapy, it’s for them, not for him. We never get the sense that he believes he needs to change. And that’s kind of astonishing to see.

Eventually Jared need to come to terms with disappointing the people he loves. And maybe he’ll need to cut out the people who are adding toxicity to his life. Those are hard choices, but they’re the right ones. This movie is really more about his parents needing to learn that they’re the idiots, and they’re the ones in need of education and re-conditioning. But while Nicole Kidman, in all her church lady big-hair, bejeweled glory, sort of comes around, there’s not a lot of remorse on the part of Russell Crowe’s character. And that’s where the movie falls short. Jared is surprisingly at ease with himself but the movie doesn’t give him nearly enough credit. Director Joel Edgerton, perhaps unsurprisingly, spends more time on his own character, than he does on the ones with real influence in this story.

Boy Erased is a good, competent little movie that will fail to make a big impression.