Already loving the quirky little score, borrowed heavily from Indian films, as the pedi-cab races toward the train station.

Less than 3 minutes into the film and we’ve already left poor Bill Murray behind. Why do I feel guilty though? Peter (Adrian Brody) races by him, hopping on the train right before it leaves the station. Stupid Adrian Brody.

Peter’s brother Jack (Jason Schwartzman) has at least 8 pieces of luggage. A lovely set of course, but for ease of travel, perhaps he should consider one larger case rather than a bunch of oddly shaped little ones?

Their third brother, Francis (Owen Wilson), arrives with a busted face and a very strict 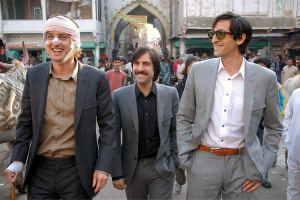 schedule to find the path to spirituality, plus an unseen assistant with a laminating machine to keep things on course. The 3 brothers have not seen each other in a year.

The brothers exchange unprescribed but over-the-counter drugs. It is immediately obvious why they might have avoided one another for a year.

Is it really a think to walk barefoot on trains in India? That creeps me out. There must be a special kind of athlete’s foot you get from the stinky carpeting.

Francis has so many rules for his brother that I’m starting to feel vicariously oppressed.

No wonder their mother (Anjelica Huston) hasn’t joined them: who would willing submit to this road trip with the world’s most sulky, dopey, resentful brothers?

The train scenes are shot on an actual moving train, moving from Jodhpur to Jaisalmer, through the Thar desert. They requisitioned 10 rain cars and a locomotive, which Wes Anderson redecorated to his aesthetic. Nothing could be attached to the ceiling, and equipment couldn’t hang more than a meter out the windows.

How can the train be lost? It’s on rails!

Francis has just revealed their secret destination: to visit their mother, who has become a nun and is living in a convent in the Himalayas. Their visit may or may not be welcome.

With such militant scheduling, it’s kind of miraculous that they remain late for the train every damn time.

Turns out there are 11 pieces of luggage; they were designed for the film by Marc Jacobs by Louis Vuitton.

Kicked off the train, the 3 brothers and their copious luggage are traveling along a path when they see a raft carrying 3 kids overturn. The brothers plunge into the waters to save them, but one is dashed against rocks and killed. The look on Adrian Brody’s face when he says “I didn’t save mine” – oof, that’s real acting right there.

I like this custom of the father washing his son’s body before the funeral. I think Western cultures are too detached from death. There’s a tragic tenderness to this scene, just a few seconds of film, actually, that really moves me.

Francis implies that his wounds are actually self-inflicted in a suicide attempt, which is particularly hard to bear since Owen Wilson was taken off the press tour for this movie after his own suicide attempt.

6 thoughts on “The Darjeeling Limited”