A small-time con-woman named Penny (Rebel Wilson) meets a big-time con-woman named Josephine (Anne Hathaway) and they inevitably tangle antlers. But then they decide to work together – Penny wants to learn from a mentor, and Josephine’s always had a con in mind that needs two people. But of course they’re still also working each other and eventually things get messy. Because while Josephine goes after big fish with an air of sophistication and a veil of class, Penny is loud and brassy and calls an awful lot of attention to herself for someone who probably should want to remain under the radar.

The two agree to settle their differences with one ultimate bet: whoever fails to extract $500K from their mark first has to leave town forever. Their mark is a rich young tech millionaire who seems almost completely guileless – Thomas (Alex Sharp, 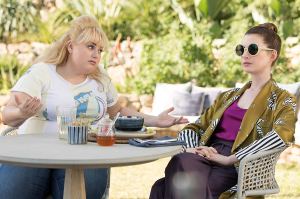 who clearly answered the casting call for a Mark Zuckerberg type and fits the hoodie perfectly). Penny poses as a blind woman to remind Thomas of his blind grandmother, and Josephine as the German doctor who can possibly treat her (hysterical, don’t ask) blindness. There are a thousand princes in Nigeria who could tell you this scam is unnecessarily convoluted, but where’s the fun in that?

Anne Hathaway has clearly been working on some accents, and here they all are. Rebel Wilson always has a breathless charm about her but I’m sick to death of her having to play roles for women lacking physical self-confidence. We get it: she’s fat. Hollywood continues to go out of its way to reassure us that they know she doesn’t belong. Here’s another character who feels unworthy because of her weight. Um, really? You do know it is entirely possible for someone to be fat AND confident. And more importantly, it’s extremely possible to be fat and still do your job, and do it well, and not make a whole thing about how much you weigh while you’re doing it. Wilson brings so much energy to all of her roles it’s exhausting to watch her, and a little uncomfortable too, because her body is so often the punchline and that’s not a joke I want to be in on.

The script is pretty uninspired, filled with the usual cons you’ve seen dozens of times before: men being duped into proposing with enormous rings, stealing diamond jewels, casino heists, etc. It’s a gender-flipped remake of Dirty Rotten Scoundrels that is simply too lazy to be any good; they don’t bother to update the jokes and there’s a deep chasm where subversive feminist comedy should have gone.. There are isolated laughs but nothing consistent. A training montage that for some reason includes clearing a pommel horse and uncorking a champagne bottle is particularly cringe-worthy. Hathaway and Wilson are fine, but they don’t have particularly good chemistry and it’s frankly upsetting to watch them be wasted on a movie whose only true con is the one that bilked you out of a $12 movie ticket.

16 thoughts on “The Hustle”