John Lennon died before I was born, but that hardly means he’s failed to have an impact on my life. He casts such a long cultural shadow, his musical catalogue has such depth, and his ideas and philosophies linger still, in even the simplest line drawing of his face.

John & Yoko: Above Us Only Sky focuses on the 1971 recording of his album, Imagine, at Tittenhurst park, where he and his family had retreated from his swollen, frantic lifestyle as the world’s most recognizable pop star. Imagine stands apart from the work he did with The Beatles, and is in fact very much a collaboration with his wife, Yoko, and the ideas she tested out in her written work – especially 1964’s Grapefruit. 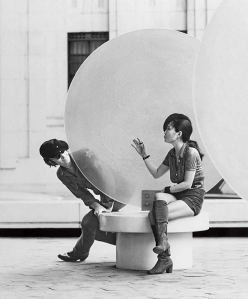 The documentary is replete with never before seen footage and home video. It shows John and Yoko in repose, at play, at work, the midst of inspiration. Lots of session musicians and music journalists are interviewed – director Michael Epstein has literally sought out every and any person who was in or around the Tittenhurst recording studio at that time, including Yoko Ono herself, and son Julian.

Imagine surpasses musical status and has become a cultural touchstone. John & Yoko brings the album back to earth, back to its humble beginnings as bits and pieces inside John’s head. We see the songs mature from ideas to sometimes orchestral pieces, the musicians alive with an excited motivation they’ve probably never reproduced. Still, my favourite moments of this documentary are the domestic ones. It’s thinking about little Julian, who gets to crawl around a legendary recording studio but is bored out of his gourd listening to the same song over and over again. To him it’s just dad’s work. I also really loved watching John record a dis track against Paul – with George! Of course we didn’t know to call them dis tracks yet in 1971, but that’s exactly what it was, and it’s a delicious part of history, and John himself addresses the tension between himself and fellow Beatle Paul McCartney. They were brothers to the end, I think, often fighting because they were simply too close.

This documentary has lots of juicy little moments, literally something for every fan. But it’s also a tribute not just to John and Yoko’s love story, but to their partnership, their meeting of the minds. Because it’s clear that John is not just infatuated – he admires and respects her. She clearly influences his thinking, solidifies his philosophies. They’re changing each other at a cellular level and you can almost see it happening. John & Yoko is definitely worth a watch as it breathes new life into an album that’s hard to picture the world without.