As any comic book fan knows, Marvel Comics has more interesting heroes than DC, because Stan Lee’s storytelling focus was as much on the hero’s day-to-day life as on the showdown with that month’s villain.  DC’s heroes have never had the same issues, because they are either literal gods (Wonder Woman), aliens who are stronger than most gods (Superman), or humans with seemingly unlimited physical, mental and financial resources (Batman).  But because DC’s heroes are so powerful, DC’s villains have always had the edge on Marvel’s, and the Joker is at the very top of the list of DC’s best villains. 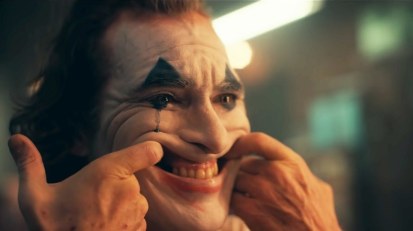 DC’s latest movie, Joker, tells the origin story of the iconic villain.  Well, it tells an origin story for Joker, one that to my knowledge doesn’t line up with anything in the comics.  It is a fitting origin that has some nice touches, including a subplot that casts Gotham’s beloved Wayne family in a very interesting new light.

We’ve seen the Joker on screen before.  Jack Nicholson was suitably over-the-top and cartoonish, but still maintained a dark centre, in Tim Burton’s Batman (1989).  Heath Ledger was a flat-out monster in The Dark Knight, delivering an all-time great performance that gave a new level of legitimacy to comic book films.  Jared Leto’s gangster Joker was almost an afterthought in Suicide Squad, and it probably would have been better for Joker not to have made an appearance in that film at all.

Now, in Joker, Joaquin Phoenix takes on the role, and he’s phenomenal.  Phoenix’s Joker feels different enough from Ledger’s to be original, but borrows smartly from Ledger’s mannerisms to give Joker the manic energy that makes him the clown prince of crime.  Seeing Joker emerge from the man formerly known as Arthur Fleck is a riveting process.  Director Todd Phillips rightly describes Joker as a slow burn and the pace of the movie creates significant tension.  We know Fleck is going to snap, and we can almost understand why, but we don’t know when or how.

Joker is worth watching for Phoenix’s performance, which, like Ledger before him, should get serious Oscar consideration (this time, for Best Actor, as Ledger won Best Supporting Actor for his Joker in 2009).  Joker might be up for other awards as well, and the awards buzz is well-deserved.  There is more than one way to make a comic book movie, caped crusaders are not always needed, and when the villain is this mesmerizing, it’s okay for the bad guy to win.