Cliff Secord (Billy Campbell) is a crack pilot training for the air racing nationals who has a bad case of the wrong place/wrong times. When testing out his plane, he flies over a shootout between mobsters and G-Men. In the end, his plane gets trashed, he is on the hook to pay for an exploded fuel truck, and he’ll have to put on a clown costume to earn enough money to settle his debts. But wait, what’s that underneath his plane’s seat? Why it’s Howard Hughes’s jetpack superweapon that the Nazis will do anything to get their hands on, and the FBI is racing to track it down first.

Naturally, Cliff takes to the skies and becomes a superh 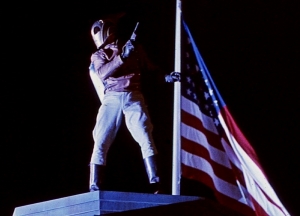 ero, with the help of his engineer Peevy (Alan Arkin). But in doing so, Cliff attracts the attention of the Nazis and mobsters, and before you know it Cliff’s girlfriend Jenny (Jennifer Connelly) needs rescuing. It’s up to Cliff to hold onto his jetpack long enough to save Jenny and, I guess, also save America.

I hadn’t seen this movie since the 90s and what stuck with me after this recent viewing is how badly the Rocketeer’s effects have aged. They probably weren’t great even at the time but now they just look sad.

But in a way, the bad effects are kind of fitting, because this film’s whole raison d’être is nostalgia, and the clumsy effects feel like a remnant of that same bygone era. The

Rocketeer is a throwback to that fabled time in America’s history where men were men, women were eye candy, the good guys always won, and even criminals were too patriotic to work for Nazis. It’s the cinematic version of Captain America punching Hitler in the face. Cue the flag waving and tears of pride.

12 thoughts on “The Rocketeer”