Chicken Little has been shunned in his community ever since, you know, that incident. The one where he said the sky was falling but it wasn’t? Yeah, majorly embarrassing – they even made a movie about it, seemingly just to rub it in. Plus he’s bullied at school and things have been totally strained between him and his dad.

Chicken Little’s dad, Buck Cluck, was a very popular jock back in his day and he hardly knows how to cope with such a puny, disappointing son. Chicken Little (Zach Braff) decides the best way to win over his dad (Garry Marshall) is through sports, so he joins the baseball team and against all odds scores a game-winning run. Don’t worry, he doesn’t let it go to his head (yeah right). But you know what does go straight to his head? Another piece of the sky, which promptly falls on him. Chicken Little’s a little wiser this time – he knows sounding the alarm bells will only spell more mortification for him, so he keeps it to himself and a few trusted friends, namely Runt of the Litter (Steve Zahn) and Abby Mallard (Joan Cusack) (aka Ugly Duckling) (Abby Mallard, that is, not Joan Cusack; Cusack is a wonder and a delight, but I don’t think it should be used for poor Abby either). Turns out, Chicken Little ISN’T crazy, but nor is the sky falling. In fact, it’s pieces of wonky spaceship he keeps getting pelted with, and the whole thing boils down to: ALIEN INVASION!!!!

Truth is, I forgot about Chicken Little, which came out back in 2005, and I definitely forget to classify it as a Disney film, which it is. It came out just a year before Disney officially merged with Pixar, so it’s a weird hybrid where the animation is definitely trying to look more like Pixar but it lacks Pixar’s edge, their detailed world-building, their boundary-breaking story-telling. It’s only Disney’s second completely computer-generated animated film (after 2000’s Dinosaur) so it makes sense that they haven’t found a signature style yet.

Anyway, I was reminded about Chicken Little being a thing when I visited Disney World back in February because Chicken Little himself was just walking about the park as if he had nowhere better to be. His friend Abby Mallard was with him, and they both stopped to sign autographs for my 4 year old nephew who was delighted despite not knowing who the heck they were. Abby was in such a good mood that she grabbed my hand and started skipping down Main Street with me, toward Cinderella’s Castle. And that’s what you have to love about Disney. Those characters were unannounced, unscheduled extras. They were walking around making the day extra special for several kids, and several more kids at heart.

Zucchini goes to live in an orphanage after his alcoholic mother dies. The orphanage is not a bad place. This is not a bad-orphanage movie. It’s about the broken children who live inside. The kids are there for many reasons (deportation, mental health, abuse, poverty, etc); some can dream of one day returning home, while others know they never will. For the most part the children band together and support one another as they cope with loss. 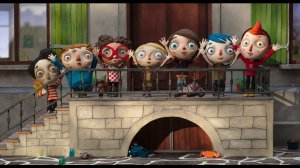 My Life As A Zucchini is stop-motion animated in a very compelling way. It’s a simple story with colourful characters and a strange title but make no mistake, there’s little silliness awaiting you. It’s a pretty bleak story.

I watched the version dubbed in English, which features voice work by Nick Offerman, Will Forte, Ellen Page, and Amy Sedaris. But even with all this wonderful adult interference, director Claude Barras keeps the story firmly within Zucchini’s corner. The story is told through the eyes of children, almost without taint from the adult world. It is heartbreaking but also tender and compassionate. By focusing on the resilience of children and the difference even one caring person can make, hope shines its rays even on this dark little tale.

I enjoyed this very much. It’s not as heavy on the heart as it sounds, and Barras manages to wrap things up in under 70 minutes. I’m always a fan of the loving work that goes into stop-motion and this one is no exception – perhaps it is exceptional. The expressive characters and honest story give My Life As A Zucchini a sensitivity, like a spoonful of sugar to help the medicine go down. I’m very taken by this and am heartened to see animation tackling such complex characters so deftly. Definitely worth a watch, tissues at the ready.

The first thing you need to know about this mystery movie is that it’s not much of a mystery. You’ll know who the killer is right away, and not just because of your excellent deductive skills. While it doesn’t keep you guessing in the traditional mystery way, it does keep you on your toes because it delights in being flat-out weird.

who will strike you as half bumbling fool, half savant. His partner Fleur (Natasha Lyonne) is more interested in getting laid and his superior (Amy Sedaris, playing delightfully against type) is a stranger case still. Not to mention the fact that Handsome is in charge of “detective school,” training up the new recruits, not all of whom are destined to become ace detectives. So he’s got his hands full when a decapitated body is found on the manicured lawns of a minor celebrity (Steven Weber), splayed out in the shape of a Star of David. Handsome tracks down all of the dead girl’s known associates, including his own beautiful new neighbour, in order to crack the case.

Like I said, the detecting is rather beside the point. This movie feels more like an exercise in the bizarre. I happen to like Jeff Garlin and find him watchable, but this movie may have set a new record in our house for number of arched eyebrows I shot at Sean. There’s little plot but quite a lot of satire in the police-procedural vein. If you’re up for some of Garlin’s trademark witticisms and you don’t mind if your movies exist outside the box, then this  might be a WTF way to spend some time with Netflix. At any rate I admire the experimentation and the improvisational feel; Netflix certainly has become home movies who would otherwise remain homeless. And even if they don’t always hit it out of the park, at least it’s not another super hero franchise!

A man obsessed with the paranormal (Napolean Dynamite himself, Jon Heder) decides to put together a “crack” team, including Justin Long, Amy Sedaris, and David Krumholtz, to do a little ghost-hunting himself.

The team are meant to be losers and comically so, but that doesn’t explain away the incredibly bad acting, particularly by Justin Long who was never great to begin with but now has fallen down into the boggy ditch-water of has-been celebrities.

You may remember Justin Long’s brief time in the sun: 2006-2009. He’s Just Not That Into You was probably the pinnacle of, and the virtual end of, his career. The world just wasn’t that into him anymore. He’s continued to work, sporadically, nearly invisibly, in pity projects that his old friends throw him, like scraps to a dog. And god knows he does have those puppy dog eyes. But even among the B-listers in this movie, he’s a stand-out bathed in a spotlight of inferiority.

Anyway, the one interesting thing about this movie is that it fails on so many levels: it fails to be a juicy ghost story, it fails to be a decent horror, and it definitely fails to be remotely funny. It’s ostensibly trying to make fun of those paranormal “reality” shows but doesn’t have a goddamn thing to say about it, really. The jokes are paper thin. There’s a third act twist that’s almost good fun but they misuse it by throwing it in beyond the point of our caring. Most people will have turned Ghost Team off well before they ever see it. And truly, it’s not worth hanging in for. Nothing is. This straight-to-video waste of time is better left unwatched.