Two young people are trying to have sex, apparently on their wedding night, which is important to note because they’re old-timey virgins who are nervous and awkward and don’t really know where things go or for how long or how hard. 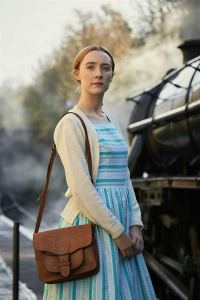 they have a history! Their courtship was often influenced (often negatively) by their pasts, by their families, by what they know and what they don’t. Sound familiar? That’s probably because it’s true of absolutely every human who has ever lived. So how did this movie get made?

Well, Ian McEwan wrote a wonderfully descriptive book, as he does. The kind of book that languishes and meanders around in a poetic bath of language. On film, oh gosh, it’s beautiful, and Saoirse Ronan is luminous and wonderful, but there’s not a whole lot of action. Haha, even saying the word action in this context feels bizarre. I mean, on their hottest date, Edward chastises Flo for her lukewarm bird watching.

Anyway, if you find it hard to imagine what sex was even like in 1962, before the sexual revolution had really…revolved…well, consider yourself lucky. On Chesil Beach gives you an eyeful in all its pasty glory, which doesn’t actually involve any nudity because this is the generation that has never seen their partners naked. Anyway, the fumbling is real. Activities are prematurely aborted, or, well, not quite. Things are said. Things like: that’s revolting, which is hard to recover from. It begs the question: does sex just sometimes…not happen? ‘Frigid’ is another word you don’t recover from.

Anyway, the whole thing feels rather minor, and that’s not a comment on poor Eddie’s manhood. It’s just very introspective, and perhaps a visual medium is not quite the best path for this story. And the movie just stretches on and on, beyond what feels right or makes sense. Certainly beyond my patience, and beyond the tether of my empathy for these people. The film fails its characters and fails the audience by not having much of a bigger picture. At least with a book you can hurl it across the room – hell, I’m sure I’ve even broken a window or two launching a stupid book right through it, but a movie? Those faces loom so large and yet I cannot reach out and slap them, and that is the greatest travesty of all.