Hailee Steinfeld plays Nadine, an awkward teenager. Scratch that. Make it a super awkward teenager. So awkward that I kept ducking behind my coat (the only thing available to be in the theatre), blushing, needing a buffer between myself and all the squirm-inducing goodness on screen. 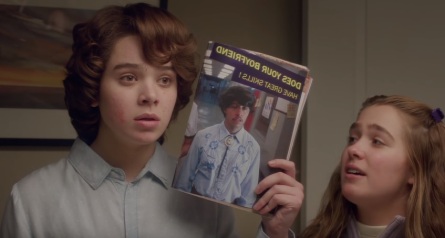 awkwardness just goes on and on. To make matters worse, her brother Darian (Blake Jenner) has it easy: perfect skin, perfect grades, the perfect apple of his mother’s eye, and a perfectly terrible person to be compared to for the rest of your life. To make matters EVEN worse, Darian starts dating Nadine’s best friend (read: only friend), which means he’s getting all the comfort that used to be hers, and she’s forced to be at war with them both while still, you know, blundering her way through life and high school, with only an irascible teacher (Woody Harrelson) in her corner – and believe me, that’s a bit iffy.

Writer-director Kelly Fremon Craig seems awfully comfortable behind the camera for a first-timer, but it’s the writing you’ll admire most. Nadine is largely unsentimental, and unsentimentally portrayed. You love her despite the fact that she’s a dumpster fire. She makes all the wrong decisions, usually in the most flamboyant way possible, and yet it’s impossible not to care. Maybe it’s that we can all find some small part of ourselves and our experience in Nadine, in her struggle just to survive a pretty delicate (read: embarrassing)

All of the performances are exemplary – even the adults have secrets and dimension. The ensemble works together in a very dynamic, authentic way that would be depressing if it wasn’t so funny. Craig’s writing is snappy and smart, and she manages to keep her protagonist’s unlikeability an asset to the film. It’s an observant film, and universal enough to exceed the confines of a teen movie and appeal to the awkward teenager in all of us.