Richard Jewell seems somewhat problematic. He’s power hungry, he’s got no regard for jurisdictional limits, and he thinks he’s a cop when he’s really just campus security. So when he finds a suspicious package under a park bench during the 1996 Olympics in Atlanta, you can see why the FBI might consider him a suspect. But that only goes so far, and doesn’t explain why the FBI viewed him as the ONLY suspect, or why they leaked his name to the press, or why they tried to coerce a confession from him through a fake training video.  It’s malicious prosecution at its finest, aimed at a guy who was only guilty of being in the right place at the right time.

Richard Jewell also seems like he deserved to be a hero for a little bit longer. He saved lives by finding that suspicious package and getting the bomb squad involved. At first, he got the hero treatment, but within days, he was named as the prime suspect, and then his hero days were done. All he was after that point was the creepy guy who might have done it. The FBI wouldn’t be investigating him otherwise, would they? Turns out that yes, actually, they would, because they had no one else to pin this on. 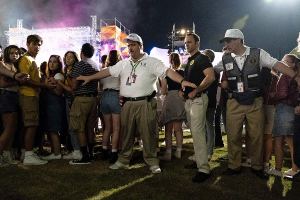 Richard Jewell is profiling gone wrong. Clearly, the American justice system is really shitty to anyone who fits a profile. This case was one where a white man was being profiled, so it became a movie. Just imagine how many minorities have been, and are currently being, similarly pursued because they fit a profile, or were “close enough” to the profile for the FBI to squeeze them into that box.

Clint Eastwood is still looking for American heroes, and Richard Jewell clearly fits Eastwood’s profile. It’s a less dangerous profile than any in use by the FBI as long Eastwood doesn’t ask the heroes to play themselves. Eastwood’s retelling of Jewell’s story ignores any shades of grey, preferring to cast the FBI agents (played by Jon Hamm and Ian Gomez) and the media (led by Olivia Wilde) as corrupt and callous, and Jewell (Paul Walter Hauser), his mom (Kathy Bates) and his lawyer (Sam Rockwell) as decent and caring.

As a film, Richard Jewell works well enough (Bates and Rockwell are great as always, and the rest of the cast is solid) but it feels like a missed opportunity. The story isn’t that one poor guy got targeted one time. It’s that the system encourages and rewards this type of police work and this type of media coverage, where getting it right doesn’t matter half as much as finding someone, anyone, to blame.

I’ve been off Clint Eastwood, and it didn’t exactly take a lot of sleuthing to know enough to stay away from this one regardless. But now that it’s available on Netflix Sean wondered: well, how bad could it be, really?

If you ever find yourself asking that question, give yourself a quick and stinging slap in the face. Better yet, have a trusted friend administer the dose for you if you can. How bad can it be? How bad? You don’t want to know how bad. But if you do, you glutton for punishment, a quick guide to its faults:

Guys, straight up: it’s painful to watch. I don’t want to dump on the actual guys because honestly, it’s not their fault. No one would blame them for trying to make a few bucks on their claim to fame. This is all Eastwood. He should damn well know better. And the fact that he has continued to receive funded projects post-15:17 to Paris is all the proof that white male privilege is alive and well that we need.

You know his name: Captain Sully became a celebrity and a hero when he made a successfully landed a passenger jet in the Hudson river after losing both engines shortly after takeoff. The passengers, the media, and then the

world, praised him for his quick thinking and skill. His maneuver saved every soul on board. It was quickly labelled “The Miracle on the Hudson.” He made the rounds of late night talk shows, smiling politely as hosts feted him, but that smile was a facade.

What few of us realized at the time was that Captain Sullenberger and co-pilot Jeff Skiles were going through private hell. While dealing with crippling flashbacks, they were basically put on trial by the National Transportation Safety Board, accused of making the wrong decision and endangering a plane full of passengers.

Sully, with 40 years of experience, knew in his gut that going into the river was the best option. The NTSB, however, maintain that computer simulations prove he could have made it back to La Guardia for a safe landing on an actual strip. All the people thrown into frigid waters, the cold and frightened babies, the weakened-heart old ladies, could all have been spared a terrifying crash-landing. Should Sully be held responsible for his actions?

Tom Hanks as Sully is spectacular. He deftly portrays a crumbling man, one whose confidence is badly shaken, who can’t escape the mental replaying of the incident, the assessment of the choices he made, effectively putting 155 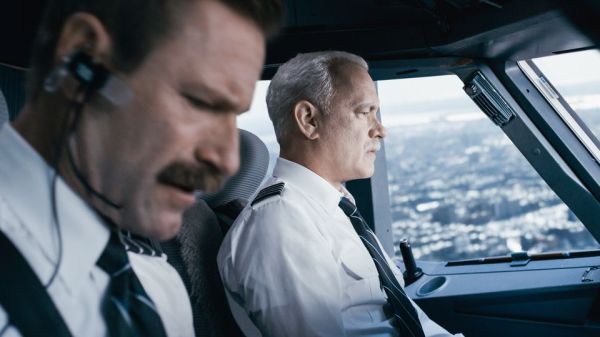 lives on the line, his own included. Aaron Eckhart plays Skiles, the right-hand man with an equally formidable mustache (what is it with pilots and mustaches?). Laura Linney has is relegated to an even smaller part, as the wife on the other end of a telephone. Both are fine, but this is clearly Hanks’ show, and Sully’s story. He’s the one not just with his reputation on the line, but his career and pension and ability to support his family in flux too.

Director Clint Eastwood plays it safe; in fact he even downplays what must have been a petrifying few minutes for the other 153 on board. What he may not have accounted for is how jarring Sully’s day-mares are to an audience, post 9-11 (and keeping in mind the movie hit theatres for its 15th anniversary). Sully keeps imagining that his plane is zipping through New York City’s skyline, missing and not missing buildings along the way. It hurts.

Where Eastwood excels, and always has, is in hero-worshiping, and Sully’s an easy target. Humble, grateful, stoic: just the kind of man that appeals to old Clint. But Sully’s not the only hero I see here. The flight attendants are brave. The air traffic controller is determined. Rescue workers are quick. Ordinary citizens lend a hand. Heroes come in lots of shapes and sizes. Not all wear uniforms. Maybe Clint should make a movie about one of them sometime. 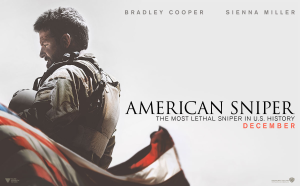 The first two minutes of the movie is the trailer, only worse. The trailer pares that scene down: sniper Chris Kyle sees a little boy and his mother enter a war zone and is responsible for either killing them, or letting them live, possibly to take out his fellow soldiers. He has only moments to decide. We hear his heart beat and feel the weight of the decision. In the movie? Not so much. It’s noisier, there’s more distracting us, it just doesn’t feel as clean or as pure. And if a movie makes you long for the trailer, it doesn’t exactly bode well for the remaining 2 hours and 11 minutes.

Plus there’s Bradley Cooper and his stupid fat face and his faltering Texan accent. I liked when the movie touched on the moral question, on how this guy, based on a real man (with four tours to Iraq under his belt and 160 confirmed kills), deals with taking lives, sometimes that of women and children. Even if it’s the “right” call, how do you make it feel right? I don’t think Cooper was up to the task of grappling with those emotions, and I really felt their absence. I didn’t feel like the script was up to the emotional depth that I was wanting either. Both felt lacking.

I wasn’t comfortable, am not comfortable, with the strict good guys vs bad guys presented in this movie. A sniper on the other side, doing the exact same job with the exact same weapon, with his own wife and kids at home, is a terrorist, plain and simple, while Chris gets to be the war hero. He’s the guy who’s most homesick when he’s back in America with his wife (Sienna Miller) and his eventual two kids. He’s chomping at the bit to be back in Iraq with his “flock.” His home and his family are overseas. He’s restless unless he’s among men, playing saviour. So it’s hard to believe in the film’s premise, in “Kyle’s sacrifice” because you see pretty clearly that he’s not making much of one. When he’s in the shit, he’s exactly where he wants to be and the only place he really knows how to be. Maybe his family back home is paying the price, but he doesn’t seem to care much about them and neither does the movie; they only exist as emotional fodder.

Cooper’s performance is not without its high points. I’m thinking of a particular scene in the last third of the movie when he’s again confronted with a should I or shouldn’t I scenario. His coughing relief, understated but palpable, is 2 seconds of film that every actor aims for and few ever reach. But a few shining moments strung together by Cooper between a couple of well-shot war scenes just weren’t enough. Too much hero-worship. Too much patriotism-as-religion. Eastwood gives us a pretty meaty tribute but ultimately is too respectful to dig into the reality.