Joy is joyless. There is nothing entertaining about watching Joy and her family of unsympathetic characters make bad decisions. And even when Joy eventually triumphs, it’s not fulfilling in the least because by then you are tired of her.

Apparently this is all based on a real person, Joy Mangano. According to Wikipedia, the real Joy is a big deal on the Home Shopping Network and invented the mop in this movie along with a bunch of other stuff. The real Joy is now a multimillionaire and an executive producer of Joy the movie. I didn’t know of her beforehand and in hindsight I would rather have kept it that way. I did not find Joy’s story interesting and it’s certainly not entertaining. The only way I can rationalize this movie’s existence is as an ego trip for the real Joy.

So naturally, I am surprised this is nominated for a Golden Globe in the Musical or Comedy category for two reasons. First, it’s not a good movie. Second, it’s not funny at all. I didn’t laugh once.

I’m surprised as well that Jennifer Lawrence is nominated for best actress. I don’t think she gives a bad performance but there’s nothing here worthy of recognition. Joy needed to be a sympathetic character in order for this movie to work, but she’s not. There’s nothing Lawrence could have done to change that, it’s an inherent flaw of the underlying character.  You don’t feel sorry for Joy because she’s letting her family (and ex-family) take advantage of her, so of course her life is shitty.  She keeps letting that happen over and over, and I quickly stopped caring whether she would have a happy ending.  All I wanted after about 20 minutes was for the movie to end.

But because of those Golden Globe nominations, I stuck with it. I felt obligated and I figured Joy must turn around sometime. Well, it doesn’t. Joy is a chore all the way through, which is ironic considering Joy is a movie based around a cleaning product. I give Joy a score of four Miracle Mops out of ten.

Dan didn’t much care for it, and I respect his opinion, but felt compelled to see it anyway. Isn’t it funny how we do that? I wrote a review on a terrible movie called Freeway, but because it’s Reese Witherspoon doing the terrible, that review managed to garner someone else into watching it. So, that being said, I knew because Dan told me, that this would be a bad movie, and it was. But I still watched it, and here’s why:

a) David O. Russell directed it. Now, if you know me, you may realize that this is not normally a selling point for me. Silver Linings Playbook did nothing for me; American Hustle did even less. But I did love The Fighter and I hearted I Heart Huckabees. But sometimes even David O. Russell hates David O. Russell movies, such is the case with Accidental Love. This movie has been collecting dust on the shelves since 2008. Russell removed himself from the project in 2010. Somebody has just decided to release it, so it bears the “director is embarrassed” pseudonym Stephen Greene. Russell normally excels at satire. It’s the heart of Huckabees. So I imagine he saw the potential for a hell of a political satire in the script, but let me assure you, it never pops in this movie. It never works, not even for a second.

b) The cast. Jessica Biel doesn’t have any bank with me, but James Marsden does, and so does Jake Gyllenhaal after his brilliant turn in Nightcrawler. I most possibly most impressed with

Catherine Keener, whom I love but seems to be typecast as these blowsy, hippie types, but gets to play a conservative astronaut-turned-congresswoman complete with bucket hair and power suits in this one and does a really, really good job. But then the cast had to walk out on filming because the producers failed to show they had enough money to actually pay them, and even worse, pay the below-the-line crew members.

c) The satire. It’s easy enough to poke fun at the health care system in America; it pretty much lampoons itself. Why then does the whole thing fail to gel? If principal photography was never

really completed, you can understand why a movie might not meet its potential. But they’ve cobbled together a beginning, a middle, and an end, and at no point does it feel like you’re watching something smart or funny or worthy. This movie may have been plagued with production difficulty, but it was also plagued with pure suckage. If Kirstie Alley lands more laughs than Tracey Morgan, ABORT! Do not pass Go. Do not collect $200. And do not stick in Peewee Herman as straight man just to see if anyone notices. Kristin Gore is credited for her screenplay – as in, daughter of Tipper and Al, a family not known for their comedic stylings, but alas, she has written for Futurama and she’s got politics in her blood, so how can we forgive her for so completely missing the boat?

So, Dan was right, as we knew all along he would be. But sometimes you have to roll around in the slop just to enjoy the bath afterward. Amiright?

I first came upon director David O. Russell in Three Kings (that Gulf war one with George

Clooney, Mark Whalberg, and Ice Cube). It was 1999 and I was in high school, which meant I was being flirty with grown men in dark bars in cities other than my own. I was in Montreal with Jimmy and Dan and I can’t tell you why, or even how come. I can tell you that I was at a dive bar with sticky floors and cheap beer, which usually wouldn’t matter because I was strictly a rye girl, but after a dozen ryes, a straw was enough to get me to down a pitcher. Blech. For some reason instead of going home, we went to a movie theatre that was apparently open all night, and caught a screening of Three Kings. I distinctly remember the brightness of the colours, the deflated lung, and how many times I got up to pee (I hope I didn’t disturb the other patrons getting $5 handjobs from St. Catherine Street hookers!).

looks like somebody’s a little bit in love with Mark Whalberg!). Then things get weird. Russell did Silver Linings Playbook in 2012, which for me was a flop. Then American Hustle in 2013, which totally bored me. And then Accidental Love in 2015 (though it’s considerably older) which is such an embarrassment he wouldn’t even put his name on it (it’s credited to Stephen Greene). I think that’s quite a marked downward spiral, but others will inevitably disagree ( SLP and AH usually being well-liked and fairly well-received, critically). He and I, however, have parted ways, and I do wonder why.

Back in his film maker adolescence,

he brought us Flirting with Disaster, which is maybe all any of us needed to know. Ben Stiller plays a dude in search of his birth parents. Tea Leoni plays the inept case worker seeking to reunite AND document the process. It isn’t pretty, but it does kind of work. There’s a zaniness that’s practically obligatory when you cast Ben Stiller (with his original bad teeth – so distracting!) but it’s tempered by a lot of dark comedy I wouldn’t have naturally thought this cast capable of. It takes some unexpected turns, flouting the expected route, with that old Russell smugness you’ve come to know and cherish. Definitely worth a watch for Russell fans.

mself continues to rub people the wrong way – if not always his audience, then at the very least his cast. On this very film, Ben Stiller constantly had heated arguments with Russell.

Tomlin survived this one only to have huge clashes with him on the set of I Heart Huckabees (where he famously called her names and knocked over pieces of the set – it’s Youtubable).

This past winter it was rum 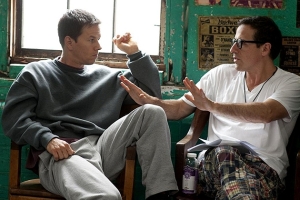 oured that he and Jennifer Lawrence were getting into screaming matches on the set of their new movie, Joy. All of these incidents tend to be downplayed as simply his method. He gets his actors into character by slipping into it himself – and maybe it’s hard to argue this as he has in fact directed SEVERAL to Oscar nods and wins. But there’s gotta be something wrong if you can’t get along with Hollywood teddy bear George 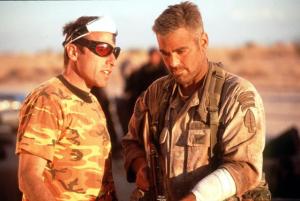 Clooney, who came to blows with Russell over his alleged treatment of an extra. Things were tense on set after that, but to my mind Russell had already declared himself an idiot when he preferred both Mel Gibson and Nicolas Cage over Clooney for his role in Three Kings. What kind of vision is that?