We know Brooke (Vanessa Hudgens) doesn’t believe in fairy-tales because that’s what she flat-out tells a student at the very top of the movie. Making such bold and inflammatory statements practically invites the supernatural, so when a knight from 700 years ago suddenly turns up in her life, it’s pretty much her own fault.

Sir Cole (Josh Whitehouse), the transplanted knight, was just going about his 1300s life when he meets an “old crone” (not my words, believe me, and not exactly an accurate description either, even, I suspect, by 1300s relativity) in the forest who gives him a quest to be completed before midnight on Christmas Eve. Next thing he knows he’s in Ohio. In the winter. He pops up in the middle of a Christmas village where his armour seems like it might just be another merry costume, and the fair Brooke doesn’t think much of her run in with him….until she later hits him with her metal steed car and has to take him to a hospital, where his ye olde claims of identity are mistaken for head trauma.

Brooke does what any intelligent young woman would do when she meets a crazy homeless person: she invites him into her home, to stay. You have to be quite a handsome crazy homeless person to merit such an invitation, I’d imagine, armour or no armour. Only her trusty best friend (and possibly her sister?) Madison (Emmanuelle Chriqui) is the voice of reason here, but she is too easily hung up upon, if you ask me.

Meanwhile, Sir Cole (as he insists on being called) gets his 21st century lesson from – where else? – the magic picture box, ie, Netflix itself, which continues to astound me with its ability to be, um, self-referential (by my count he watches Holiday In The Wild and The Holiday Calendar…had he kept scrolling he might have run into last year’s Vanessa Hudgens holiday offering, The Princess Switch; watch for its sequel, The Princess Switch: Switched again, a real honest to goodness thing, I kid you not, in 2020).

What will happen, then, when they inevitably fall in love? I mean, these two are kneading bread together in a way that makes me blush. Guys, I must be slipping. It is WAY too early in the Christmas season (in fact, I’d argue that it isn’t even the Christmas season yet) for me to feel this benevolent toward a holiday romance. Have I gone soft as the marshmallows in my hot chocolate?

The answer may be yes: I am an ooey-gooey puddle of movie-watching goodwill and kindness. I may have lost some self-respect, I may have lost your faith, I may have to change the title of this site, but the truth of the matter is: I didn’t fully hate this movie.

If you’ve glanced at our chaotic Comments section on Jay’s Golden Globes post, you may have noticed that I am a big supporter of Todd Haynes’ Carol, which had its Canadian premiere at the opening gala of this year’s Whistler Film Festival. It was the best by far of the films I saw at the festival but- my love for this Hollywood indie aside- I am as proud as I am surprised to announced that the Canadian films I saw outshone every other American entry. Here are my thoughts on the three most pleasant surprises from my side of the border.

In The Steps, Marla (Emmanuelle Chriqui) and Jeff (Jason Ritter) are brother and sister living in

New York who are called to their estranged father’s (James Brolin) cottage in Ontario to meet his new Canadian wife Sherry (Christine Lahti) and her three kids. Truthfully, things haven’t been going great for Jeff lately. He’s lost his fancy New York job and his fancy New York girlfriend and he watches a little too much porn. But that doesn’t stop him from judging the shit out of his new step family; Sherry loves lame icebreaker games, David (Benjamin Arthur) owns the third largest paintball course in the province and loves hair metal and Nicolas Cage movies, Keith (Steve McCarthy) is a depressed former indie rock musician, and Sam (Vinay Virmany) keeps sneaking away to smoke pot. Obviously, this isn’t going to be one big happy family right away but (spoiler alert) they’ll be backing each other up in bar fights in no time. Obviously, it’s hard to watch this movie without knowing where it’s going and each character seems plucked from the Handbook for Movies About Dysfunctional Families. But the casting, both in how they inhabit their own characters as well as how they interact with the others, is bang on. It got big laughs from a small 9 am crowd at Whistler and was well worth getting up so early for.

The Steps was a perfect example of how a familiar story, when told well, can feel new. This is just as true of Forsaken, which had its Western Canada premiere at the festival. Kiefer Sutherland (who stood like 20 feet from me when introducing the film) plays gunslinger John 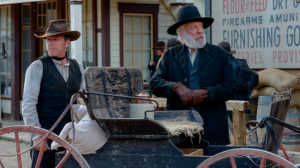 Henry Clayton who returns home to his Reverend father (Donald Sutherland, sharing the screen with his son for the first time). As a pacifist, Rev. Clayton is none too happy to see his boy and is skeptical that he is sincere in his vow to hang up his guns for good. John Henry’s abstinence from the way of the gun is tested when some bullies ride into town forcing people off their land and threaten his long-lost love (Demi Moore).

They don’t make westerns like this anymore. Forsaken is neither revisionist nor homage. Instead, it follows the tradition of the great westerns of the 50s that understood the excitement of watching a hero getting his revenge just as well as they did the importance of making us wait for it. John Henry takes a lot of abuse and witnesses a lot of injustice before finally unleashing hell. We’ve seen this character before and know how it’s all going to turn out but it’s fun to see it all play out, especially with first-time feature director Jon Cassar taking his time with telling the story. If there’s one thing Kiefer knows , it’s how to play a killer who just wants to retire but keeps getting pulled back in and plays John Henry with just the right mix of badass and bashful. Both Sutherlands play their parts well, although the accent Kiefer tries out in some scenes doesn’t suit him, and the two are at their best when onscreen together. Even more effortless, however, are the bad guys played by the great Brian Cox, Sean’s high school buddy Aaron Poole, and the amazing but underrated Michael Wincott. It’s a blast watching these three be despicable and even more fun knowing that, by the end, their uppance will come.