In nearly every church staging of the nativity story, some beatific, well-behaved little girl is cast as Mary, some lucky boy as her Joseph, and then about 30 of their friends as various sheep and camels and goats and whatnot (in Love Actually, Emma Thompson is surprised to learn there was not just one lobster but several, plus an octopus and a Spider-Man) – the point is, there are lots of kids and very few roles, so they’ve always been padded out with the animal brethren likely to be hanging around a manger.

In this particular retelling of the nativity story, the humans take a back seat to the animals; for once, they’re the stars, especially a brave young miniature donkey named Bo (Steven Yeun). Bo dreams about being in the royal caravan but in fact is locked up in a mill grinding grain all day. His buddy Dave, a dove (Keegan-Michael Key), eggs him on.

Meanwhile, Mary (Gina Rodriguez) and Joseph (Zachary Levi) are celebrating their wedding feast and about to have a VERY awkward conversation. Boy is she relieved when a wayward runaway donkey crashes the party and gives her a few minutes’ reprieve. Anyway, eventually she and Joseph start their trek to Bethlehem and Bo and Dave find a helpful sheep named Ruth (Aidy Bryant) to lead the way and help Bo with a Lassie moment.

Meanwhile, a trio camels (Tyler Perry, Oprah, Tracy Morgan) belonging to the three wisemen are also having a moment trying to get their human cargo to a baby foretold by the stars.

Every nativity scene you’ve ever seen has a donkey. Now you’ll actually appreciate him.

The Star is actually a charming little movie full of big voice talent and quirky little moments to make your season bright.

Uglyville is home to some fairly upbeat if misshapen dolls – they’re missing eyes or teeth or limbs – but most seem content. All but one doll, Moxy (Kelly Clarkson), who dreams of going to the “big world” and living with a child who will love her. She gets together a band of misfits (truly the only kind of band that CAN be assembled on this island of misfit toys by any other name), including Lucky Bat (Leehom Wang), Wage (Wanda Sykes), Babo (Gabriel Iglesias) and Uglydog (Pitbull), and together they stumble upon the Institute of Perfection, the last stop between the best dolls and their forever homes.

The Institute of Perfection is run by Lou (Nick Jonas), an alarmingly blonde-haired, blue eyed bastion of excellence. He gets all the beautiful dolls ready to run the gauntlet, the final hurdle to be cleared before being placed in a home. Moxy and gang find these perfect dolls to be outwardly pretty but inwardly ugly – they soundly and definitively and in many cases quite cruelly reject Moxy and friends for looking different.

From the very first frame, you know where this film is headed. We’re teaching kids to embrace differences and to accept imperfections. Sounds nice. But this movie takes an uncomfortably long time getting there and goes through too many catchy songs about the importance of beauty on the way. It makes you really start to sweat all the Hitler references.

In the end, the Uglydolls meet a perfect doll named Mandy (Janelle Monae) who (you may want to sit down for this) wears glasses. And through that hideous physical defect they’re able to bond and together they realize that not only is being weird okay, maybe it’s even possible for a kid to love you that way, in all your freaky glory.

UglyDolls plays like a watered down Toy Story, appealing to only the very youngest of children (my 5 year old and 7 year old nephews preferred to pick up live-action Dumbo over this for a recent car trip, but it was Sean’s recommendation of Shazam that really impressed, which meant we just spent 10 days sequestered in a cottage with kids who couldn’t go more than 5 minutes without singing “Lightning with my hands! Lightning with my hands!” and requesting this new band they’ve just been introduced to through the movie – Queen). Its fuzzy feltness and bouquet of primary colours should serve as a warning that this movie is nothing but saccharine and if you have any other requirements from a film then this one is not for you.

Hey kids, can you say B-movie? Because that’s what this one is! Big disappointment. Boring. Badly plotted. Blearily devoid of charm. Bland. Bargain-bin. I’m not even sure how this one made it to the theatres considering how low-budget it feels.

Norm of the North feels shoddily and hastily put together with a barely-there eco-friendly message and not much else. Norm is a polar bear, and he dances 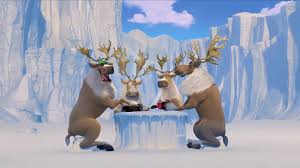 and also speaks human. That’s it. That’s the whole she-bang. Sorry I ruined it for you, but you’ve seen it before, and you’ve definitely seen it done better. The bar is set so low that any random episode of Paw Patrol will be more entertaining for your kids and less annoying for you. Yeah, I said it.

And the voice cast? The thing that’s easiest to hit out of the park? Norm of the North gets an F. Talk about B-list (or C-list)  (or D-list, let’s be honest) celebrities: Rob Schneider and Heather Graham. I mean – seriously? Did they 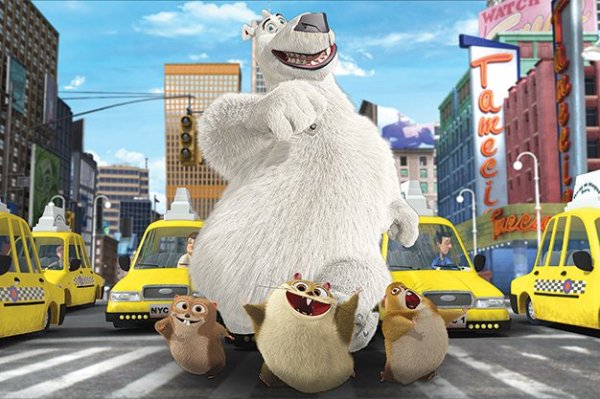 record all of the voices on Oscar night or something? Like, which “celebrity” is not only not invited to the Academy Awards, but not to any of the post-Oscar parties either, and doesn’t even have friends or cable TV to be watching them from home, and doesn’t have a job to go to Monday morning that they’re getting to bed early for? And so they called Balki from Perfect Strangers and he was busy. And they called Tori Spelling and she said no. Screech from Saved By The Bell thought the script was lame. Carrot Top thought it might compromise his artistic integrity. And on and on through a rolodex of reality-TV “personalities” until they finally scraped the bottom of the barrel, and guess who was there, desperate for a pay cheque?

(Apologies to Bill Nighy who somehow got tangled up in this mess, and to Gabriel Iglesias who did punch things up a bit.) 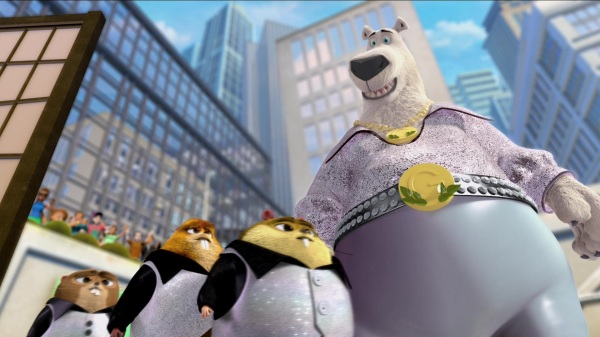 I was unprepared for how bland and pointless Norm of the North would be. How can you release this alongside Pixar fare and think you deserve to be there? It’s like hanging one of my kindergarten macaroni Christmas ornaments at the Louvre and not being embarrassed. The only thing I can console myself with is that it did set a record for worst opening for an animated feature and so maybe, just maybe, Lionsgate learned a lesson in humility.