I have 3 sisters, all younger, not that I usually admit that. We look nothing alike (one makeup artist once had the audacity to question our mother’s fidelity) and we act even less alike – personalities, politics, habits and hairstyles. We are DIFFERENT.  With a mere 5.5 years between the oldest and youngest, I still feel oddly protective of

them and it’s mind-boggling to think that they’re not in fact little girls anymore, but women, and 2 of them mothers with babies of their own. Not dollies, babies. And not even babies: one nephew is already a dinosaur expert, another an enthusiastic soloist, and a third a stunt bike rider. They’re all 5 and under and as handsome as they are smart (which is inherited from the aunt, right?).

I’ll be on my way to see them this weekend since it’s Thanksgiving and all, the holiday where we honour the tradition of my mother being an almost adequate and fantastically bland cook, the upside being we all manage not to overeat.

I have 3 sisters (and 3 sisters-in-law) but I do not have an Other Sister. The Other Sister (as in the movie, and the character) is Carla, the sister who has a mental disability. Played by Juliette Lewis, Carla was sent away as a child when her disability proved too big a 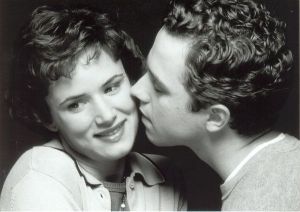 disability for her family to handle. Now a young woman, she’s moved back home and is trying to assert her independence. Her mother, played by Diane Keaton, has never really known how to parent her. Her sisters (Poppy Montgomery, Sarah Paulson) didn’t grow up with her. It’s making friends with someone with his own challenges (Daniel, Giovanni Ribisi) that inspires Carla to aspire to a larger life.

All of the sisters in The Other Sister are celebrating Thanksgiving in the film, an especially auspicious holiday because it’s the date Daniel and Carla choose to consummate their love. Turkey makes any anniversary more special, as you can imagine. And pie is always good post-sex. Post-nearly-everything. I’m not sure if any of my sisters are marking similar occasions, and I bet I won’t even ask. Instead I’ll say thanks for all the blessings in my life, even the teeny tiny ones like my pink headphones that let me watch sappy movies at work. Happy Thanksgiving to you too.

I know who Martin Luther King was. But this movie made me realize how little I know about what he went through as a leader in the civil rights movement, and it was just a tiny sample of what must have gone on throughout the 1960s (and beyond). It made me want to learn more and I think that is an important accomplishment. It has now been 50 years since the events in the movie actually took place, and I think the horrors that went on need to be remembered so we can try to learn from them (because we do still have a lot to learn). All of this is in the background. This movie would be notable for that alone, and it is hard to separate out the fact that what we are seeing actually happened, which I have been trying to do so I can then judge Selma as a movie and not just as something that needs to be seen as a record of important events.

The events in this movie are horrific. It is difficult to imagine that any of them could ever have happened, but then you remember that things like this still DO happen, that for some reason the USA still can’t or won’t indict cops who kill black people (and it is not just a US problem, the recent incidents just happened to take place there). And still that is only a small part of the big picture, because it is not just “white, black and other”. There are lots of concurrent struggles for equality going on, still, with no resolution in sight. We have made some progress but not nearly enough (and as a straight white male what I would consider enough may not even actually be enough, which makes it even clearer that 50 years later we still aren’t close to achieving real equality).

I would not likely have thought about any of this today if I hadn’t watched Selma, and it goes to show again that regardless of how well this movie was made, I am glad I saw it.  But here’s the thing: this movie is incredibly good. David Oyelowo IS Martin Luther King. He is phenomenal. He would have carried this by himself but he does not need to. Everyone involved is intent on making this movie the best picture of the year. Their love and respect for the subject matter drew me in from the very start. I do not think this movie could be any better. Because of the subject matter I cannot promise that you will be entertained but I can promise that you will be moved.