The opening gala for the St. Lawrence International Film Festival kicked off Thursday night in Ottawa with none other than national treasure and hometown boy Dan freakin Aykroyd introducing the 35th anniversary screening of Blues Brothers.

The Blues Brothers were actually born in Toronto, which is where Aykroyd ran into John Belushi for the first time, at a bar on Queen Street where Downchild Blues Band was playing. Belushi was more into metal and punk but Aykroyd schooled him that night, and the music won him over, and musical director Howard Shore put a little bug in their ear, saying they should maybe start a band, and call it Blues Brothers.

The next time they met, Belushi had some 300 blues records and was already picking songs for a record for a band that didn’t exist

yet. As you know, the two went on to be part of the original cast of Saturday Night Live, and they used this little band idea of theirs in a sketch. The rest is history: they recorded Briefcase Full of Blues, which topped the charts and sold 3.5 million albums, then they made seven more, plus the movie, and its sequel, and even a radio show. Belushi died in 1982, so now when the Blues Brothers play, his brother Jim joins Aykroyd on stage.

Aykroyd worked on the script for Blues Brothers while appearing on SNL. In it, Jake Blues (John), fresh out of prison, puts together his old

band to save the Catholic home where he and brother Elwood (Dan) were raised. The film has a little bit of Ottawa influence in it: the ballroom of the Palace Hotel where the final performance takes place was patterned after Aylmer’s Chaudiere Club. And the air-raid siren atop the Bluesmobile was inspired by the one at Our Lady of Annunciation, where Aykroyd attended school in Hull – all in the Assholes’ backyard, as it were.

Aykroyd pulled up to the festival in a Bluesmobile of sorts, and walked the red carpet in his trademark shades. He sat down before the movie and told us that his favourite character to play was 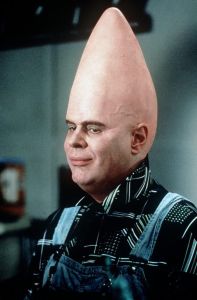 Beldar, the coneheaded alien, which he followed up with an immediate impression. I guess it’s not an impression if it’s YOUR character. “I talk at home like that,” said Aykroyd, and we believe him. His favourite movie, though, was Blues Brothers because “I had to use all the skills” – acting, writing, singing, dancing, playing the harmonica, stunt driving, not getting killed by Carrie Fisher. When someone asked about the pinnacle of his career, the question is quickly retracted, the asker not wishing to imply that the pinnacle isn’t perhaps still ahead. “May it please be behind me,” quips Aykroyd, and he’s quick to name the highlight: dancing on stage with James Brown.

Without further ado, he introduces the movie, an extended cut with extra car chase, and assures us

that he still has 80% of the moves. Watching him break out into a frenetic dance up on the big screen, you kind of want to call him on it. I’m struck by the tremendous sideburns worn by Aykroyd and Belushi, and by Elwood’s white socks. The movie is full of cameos you can hardly believe – Aretha Franklin is sassy in a stained apron, Ray Charles plays so fervently we can see the reflection of the piano’s keys in his glasses, James Brown preaches to the choir (including Chaka Khan), and John Lee Hooker gets everyone stomping.

Matt’s favourite part was hearing that Beldar bit, but mine is hearing Matt’s giggles throughout the 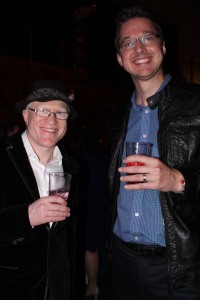 movie (he’d never seen it, if you can believe that). The movie is being screened as a special 35th anniversary edition, and it’s nice to see it on the big screen rather than “in a motel room at 1am,” as Aykroyd puts it.

Afterward, there’s a gala reception where we are treated to a poutine bar (eminently Canadian) and drink Crystal Head vodka (Aykroyd’s own brand).  Downchild Blues Band is playing for the crowd, sounding just as good or better than they ever did. When Aykroyd joins them on stage, it’s electric, and pretty soon we’re dancing on and sharing the stage with a real live Blues brother. 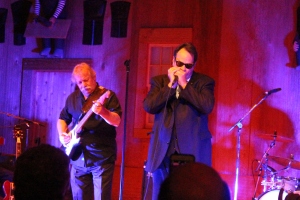