Can an atheist such as myself give an unbiased review of a movie with a distinctly Christian bent?

For reals: I don’t think I can. And I’m doing everything I can to be fair here, trying to look beyond the bible-thumping to find something else to focus on, and maybe even, to enjoy.

Okay, let’s talk about Jennifer Garner. It took me a long time to come around to her. Back in her Alias days, I kind of disliked her, for not big reason that I can relate. She married Ben Affleck in 2005 and that softened her for me. And now that they’re divorced, I like her even more, for being stoic and strong and not running her mouth. For putting her family first. For helping him get sober even as he runs around with a new girlfriend. For being a good person, too good for stupid Ben Affleck. I suppose her loving a man who didn’t deserve her makes her pretty damn relatable. And now that she’s “free” she’s a little more present on social media – and she’s funny, and dorky, and unselfconscious. She’s also very hands-on with her 3 kids, taking them to school, to get ice cream, to church.

So I suppose this movie kind of makes sense for her – it’s family-friendly, and it’s churchy, 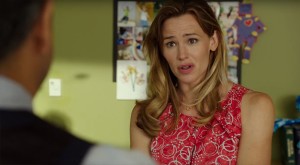 as evidenced by her rather large, Texan hair and the lively church services she attends, the kind with the “funny” pastor and the earnest rock band praising jebus. She plays a real-life mother of 3 named Christy Beam who goes through one of the very worst things a mother can experience: a sick kid. A very sick kid. Her middle daughter, Anna, comes down with one of those mystery illnesses that doctors can’t diagnose so they ignore, while a little girl writhes in pain and wastes away. And only because her mother is persistent does she eventually get a prognosis that isn’t very helpful: she has a severe and incurable disease where she basically doesn’t process food, and she will die from it.

So that’s terrible to watch. If you have kids, or, scratch that, any loved one at all, you know how hard it is to watch them be so sick when you are powerless to help. Even 24 hours of vomiting can undo a family – imagine if that became your life. [And side note: does everyone have a “sick bowl” – that special bucket that Moms seem to keep on hand specifically for those times you can’t quite make it to the toilet? Is that a thing in other families?]

So Christy’s faith is tested, because why would a loving god allow her innocent child to be sick? And her faith is further tested when other “Christians” accuse her of deserving it – whether through her own sins, her husband’s, or potentially even Anna’s. It’s the kind of thing that makes even a hardened atheist such as myself roll her eyes and whisper “Oh lord.” Even poor little Anna is starting to wonder why god hasn’t healed her. Is it possible he doesn’t care (or, um, exist?).

But no. This is a Christian movie, destined to be screened by church groups and almost no one else. So of course, a miracle must occur, and if possible, perhaps even the voice of god himself could make itself known. And if that doesn’t stun you into prayerful submission, someone will offer that miracles are god’s way of letting us know he’s here (don’t ask yourself what god is telling us when he lets other little kids die left and right).

So as much as I might praise Garner for her performance, I can’t really look past the message of this film, which is preaching to the choir at best, and downright insulting at worst. They wring this story for all it’s worth, and while I was sorry for the real Anna’s pain, and happy that she survived (make no mistake: there is no doubt that she will survive – the only question is how long they’ll string us along for first), I find it dangerous to label something a “miracle from heaven” when it really seems like a “coincidence on earth” and “an accident in an old tree”. Because otherwise we’d have to ask ourselves what makes one child more worthy of a miracle than any other, and I really, really, really hate where that takes us. That kind of fear and competitiveness makes nice, casserole-toting, big-haired church ladies into real bitches – so where would that leave the rest of us?

Ugh. This kind of movie is just demeaning.

There’s a good idea in there somewhere: four friends reconnecting. That’s the dream, right? That for one weekend you can all make your schedules obey your will, find sitters for the kids, money for the trip, time off from work. And everything converges on one magical weekend during which you can let your hair down and party like you did when you first met your crew, back when you were single and carefree.

The four friends in Girls Trip haven’t gotten together in 5 years.  Ryan (Regina Hall) is an aspiring self-help guru\daytime TV star and she and her husband are about to get their big break – too bad she can’t stand his cheating ass. Sasha (Queen Latifah) is on the verge 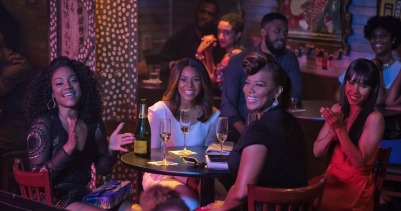 of bankruptcy and the only thing that might save her is a whole bunch of hits to her celebrity gossip site…and it’s awfully tempting when your best friend is poised to become the next Oprah just as her marriage is imploding. Lisa (Jada Pinkett Smith) is a less important friend so we don’t know much about her except she’s a caring single mother who wears scrubs at work and is pretty high strung. And Dina (Tiffany Haddish) is hardly a character at all, she’s just there to provide the kind of lewd laughs the other ladies are too famous for, contractually. It’s hard to believe they were ever friends, or that a weekend away together wouldn’t result in murder since in the film’s exceedingly long but comparatively short running time (2 hours), I had the panicky urge to start stuffing people in dumpsters.

Anyway. The script is atrocious. It’s Hallmark-grade MAYBE, heavy-handed as hell. It wants to be a females in New Orleans version of The Hangover, and it even steals a lot of their jokes (substitute roofies for absinthe, for example), but it’s weak. Very, very weak. But there are a few things that Girls Trip provides that you are unlikely to find elsewhere: 1. A “grapefruiting” demo (it’s a sex thing, duh – basically a grapefruit turtleneck for excessively large penises to aid in the blow-jobbing of). 2. You’re not seriously going to insist on a second item after that first one, are you? 3. Okay, fine: Kate Walsh as the token white lady who can’t stop talking in Ebonics. 4. As the movie is set at the Essence Festival, the film bloats itself with clips from performing artists such as Puff Daddy, Faith Evans, Maxwell, Babyface, and Mariah Carey. And about two dozen more. 5. Someone urinates like they’re legit trying to put out a forest fire with it, only instead of trees they drench people. And this happens twice.

But wait! There’s more: the power of female friendships, never leaving your unfaithful husband until you’ve got another prospect lined up, drugging the people you love, sexually harassing people like there’s no tomorrow, and white people using words they have no earthy business thinking let alone saying. So much fun. Girls Trip is a low-budget movie that looks low budget and feels even worse. But it put up some big numbers at the box office because there’s a dearth of actually funny movies these days – too bad this one’s no exception.