If you’re a fan of Josh Malerman’s post-apocalyptic horror novel, Bird Box, the good news is,  you can always reread it. Netflix has adapted this “unfilmable” book (how many books have we said that about now?), and turned it into something bibliophiles will scarcely recognize. But that doesn’t meant it’s bad.

Malorie (Sandra Bullock) is in the impossible situation. She’s pregnant at the end of the world. This particular nightmare is the inverse of The Quiet Place – they had to stay silent in order to not die, and in Bird Box, they have to not see. The sight of something is causing people to almost immediately become homicidal and ultimately, suicidal. It’s a plague killing millions, killing billions, killing everyone around the world. The only way to survive is to not see, to never see. But food and water and resources inside are finite. 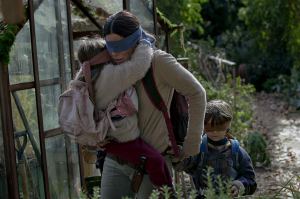 Malorie is living with a small group of people, strangers, really, who don’t always agree on the best way to exist together, or how to stay alive. Malorie’s not even the only pregnant one – Olympia (Danielle Macdonald) is expecting too, right around the same time. The house’s other inhabitants (Trevante Rhodes, John Malkovich, Jacki Weaver among them) will have to make all kinds of hard choices to ensure the group’s survival. As you probably guessed, ultimately, Malorie will need to leave the relative safety of their shared home – and worse than that, she may have to sacrifice one child to save another. Doesn’t that sound like a fun little jam to be in?

Yeah, this is a horror movie, in case you’re not picking up on the obvious. The unknown, horrible, unseeable things remain unseen by us, but they’re a constant threat. Director Susanne Bier understands it’s way creepier to only suggest the worst, and let our own imaginations prey on our fears. A newborn baby is of course the most vulnerable creature in the world. What else could heighten a dangerous situation like a helpless baby? But what else would pose a greater danger? A baby, unable to look away, unable to understand, a baby who will only need need need, and take take take, and attract attention while putting everyone at risk. A baby, two babies, normally a blessing, but in this scenario, the worst possible thing.

Bier creates a tense atmosphere and Bullock keeps us riveted. Rather than jump scares, Bier gives us a character study, and Malorie’s humanity and the children’s inherent weaknesses gives some real meat to the film’s anxiety. But the film strays quite far from the book, and to no real advantage. Since this film streams for “free” on Netflix, it’s a no-brainer if you can take the heat (or rather the chill, the frisson). Squeeze your eyes half shut.