Esther, a debatably young woman dreams of Hollywood and accepts money from her doting Granny to make the move. Unfortunately, thousands of Grannies appear 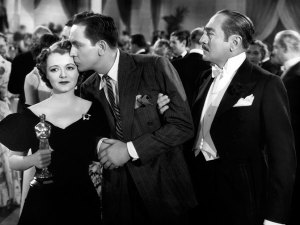 to be financing thousands of ingenues, and Hollywood is crawling with unemployed actresses. Esther is nearly down to her last dollar when she meets Norman Maine, a famous film star who eyes her both romantically and professionally. But as they fall in love and he helps her with her career, his own takes hit after hit. An unreliable alcoholic, Norman seems to have used up all the public’s good will.

Although a title card firmly denies this, it has been speculated that the story was inspired by the real-life marriage of Barbara Stanwyck and her first husband, Frank Fay. The character of Norman Maine is thought to be based on several real actors, including John Barrymore, John Gilbert, and John Bowers, who drowned off Malibu during the film’s production. This was the first all-colour film nominated for an Academy Award for Best Picture, and the first movie in Technicolor to be a critical and box office success. The muted colour palette helped, and so did the repeated jabs at the Hollywood machine. It was funny, and it cleverly avoided excessive melodrama. Esther’s ascent contrasts so starkly against Norman’s descent because the two are clearly in love, but it’s not enough to insulate them against the cruelties of Tinseltown. A true cautionary tale – I just wish Esther got to truly be the star in A Star Is Born, and that pesky Norman took more of a backseat.

As you know, this movie has been remade 3 more times – in the 50s, starring Judy Garland, and in the 70s, starring Barbara Streisand, and right now, starring Lady Gaga, in Bradley Cooper’s directorial debut. I find it a little ludicrous to cast the world’s biggest pop star as an unknown, and an “unattractive” one at that. When Babs did it, it meant something. Her beauty was unconventional, her ethnicity meant that she could have been overlooked. But her talented and fortitude shone through. Lady Gaga has already played the Super Bowl…so, let’s just say she’s a little harder sell. Even so, it’s getting rave reviews, and it’s headed for TIFF, where the hungry audiences will judge for themselves.