John Norman Howard is 3 hours late to his own show. The 50K people spilling out of the stadium are restless, but they aren’t leaving. When he does arrive, they’re ready to forgive everything, but he’s not even sober enough to remember the words to his own songs.

Meanwhile, Esther Hoffman, an unknown songstress, is the “filling” in a trio regrettably called The Oreos, performing in a bar that serves warm beer or herbal tea. It’s not a great place, and it goes downhill when it’s terrorized by a drunken, sloppy, washed up rockstar. Intentionally or not, he’s incredibly disruptive, and Esther (Barbra Streisand) knows when a gig’s gone belly-up. Generously she leads John (Kris Kristofferson) out to safety. 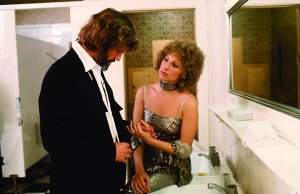 This is where the numerous A Star Is Born remakes made their jump from acting to pop music. My Mom had this soundtrack on vinyl when I was a kid – she was still a kid herself when this came out. She though Kristofferson was a dish.

Anyway, though undiscovered, Esther is a pretty confident babe. It’s clearly a role written specifically for Babs, who shines her special light every moment she’s on screen, which means it’s hard to believe her as anything but The Voice. Although, to be fair, it’s even harder to believe her as a serious love interest – Streisand and Kristofferson do not have so much as a microwave lightbulb’s worth of heat between them. They often substitute cornball humour for passion, and that’s an awkward trade-off that grinds things to a halt.

Esther is mouthy; John Norman is irascible and intoxicated and is deathly afraid of buttoning his top 6 buttons. They’re not exactly a lovable pair, and god help us when the whole thing takes its time getting going. It feels like a cliche that he needs exactly her kind of saving, and yet there it is. Of course, when her star is shooting upward, he gets predictably petulant.

All this to say I’m not a big fan of the movie. I guess you’re in it for the music or you’re not in it at all. Not to worry though, if you don’t like this one, there are a half a dozen other iterations to try!