What if your nightmares weren’t “only a dream”?

The late Wes Craven touched on something primal here with his horror classic that spawned way too many shitty sequels. Three high school students on Elm Street discover that they have been dreaming about the same nightmarish figure with severe burns on his face and knives for fingers. And that laugh. Oh my God, that laugh.

It seems that the now infamous Freddy Krueger was once just a regular child murderer. Now that he’s dead, he can only get to you in the world of your dreams. I’ve had nightmares before that would make me fight sleep just to avoid getting back to that place. Here, to fight for sleep is to fight for your life. Craven’s mythology surrounding the world of the dream isn’t nearly as elaborate as, say, Inception’s but he’s come up with an interesting idea here that he has a lot of fun with. 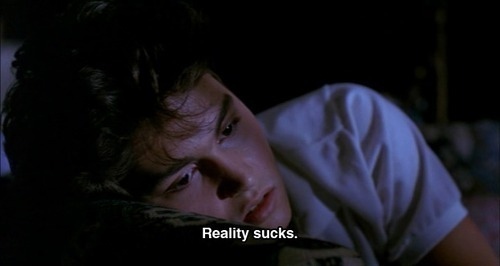 For a modern audience, the most fun part is watching Johnny Depp’s first movie looking as baby-faced as you’ve ever seen him at 20 years-old. He plays the typical teen boyfriend in a high school movie, apparently not yet having decided that he would play every part as a weirdo. Having never acted before, Depp was so nervous about every scene that he would bring an actor friend of his (who I think may have been Jackie Earle Haley, who would later play Freddy in the 2010 remake) to run lines with because he was so afraid of getting it wrong.

As humble beginnings go, Depp’s wasn’t so bad. A Nightmare on Elm Street is a Halloween guilty pleasure of the best kind.