I have admittedly very little to contribute here. I have not yet been able to see Still Alice or Cake which, as far as I can tell, may be the two front-runners here. Julianne Moore seems to be the favourite though and I will not be disappointed to see her win. She’s been doing good work for a long time and has never won (at least, not for a movie). 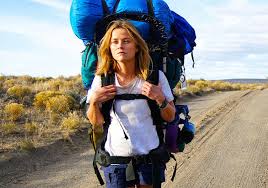 From what I’ve seen, I have to give it to Reese Witherspoon. I thought Wild was very well directed and exceptionally well edited but its really Reese that has to carry the movie. And she does which is saying something given that I’m not usually a fan. I was especially impressed that she didn’t go out of her way to try to make the character more charming or likeable.

Rosamund Pike does a good job in Gone Girl, getting better and better the as it gets clearer that things are not quite as they seem. I notice every time

I get the chance to endorse Gone Girl, I can’t seem to bring myself to treat it as a real contender in any of the categories. I remember liking it but my enthusiasm may have faded having seen it so many months ago. And Felicity Jones in The Theory of Everything has the same problem Keira Knightley had in The Imitation Game: being over-shadowed by a male co-star with a much better part.

Reese gets my vote for now.

The toughest pick by far. All five performances here are tough to argue with and- replace Jake Gyllenhaal with Michael Keaton for Birdman- and we might just be looking at the five Best Actor Oscar nominees.

I’ll start with Jake. His nomination is well deserved but he’s the only one I can comfortably rule out. He plays a superficially charming but completely soulless man in Nightcrawler as he remorselessly searches for shocking footage of violence and auto accidents that he can sell to the nightly news. Maybe its the movie which I highly recommend watching but as a satire it could have benefited from a more subtle approach in its critique of the bloodlust in today’s media. Or maybe its because Gyllenhaal relies just a little on what has served him well in the past. He’d be a major contender in a less competitive year.

The other four- David Oyelowo in Selma, Steve Carell in Foxcatcher, Benedict Cumberbatch in The Imitation Game, and Eddie Redmayne in The Theory of Everything- are all incredible for pretty much the same reasons. They all play real people. They all disappear completely into their characters. They all get better and better the more the story unfolds.

be back where I started, making a decision that would still be as arbitrary as picking one name out of my hat. I feel like Cumberbatch and Redmayne are the two most likely to win tonight. But, if it were up to me, I would probably have to go with Oyelowo. He channels Dr. King beautifully , playing him as an inspiring figure from history but also as a man, sometimes exhausted and filled with self-doubt.

The Theory of Everything. Foxcatcher. The Imitation Game. Selma. Boyhood.

Its been a good year.

The Imitation Game and The Theory of Everything seem to almost cancel each other out. Both very well done British biopics with great performances from their young stars. The Imitation Game’s is very straightforward in its direction but with great dialogue while The Theory of Everything strives for more visual poetry and has a more straightforward script.

Foxcatcher has no real weaknesses. I acknowledge and admire it for being terrificially acted and  flawlessly shot. I just can’t bring myself to be too enthusiastic about it given that the thoughts and feelings of the characters are so far out of reach.

Selma really is something to see. It makes us look back at a time not so long ago with gratitude for the courage of some and horror at the ignorance and cruelty of others. But it goes further.

Where last year’s 12 Years a Slave focused unflinchingly on the horrors of the past, Selma challenges us to look to the future with the help of an original song from John Legend and Common.

My favourite is Boyhood, not just for its cinematic achievement but for its overall impact. I don’t know why it is so often the case that the only movie not based on a true story seems to tell the most truth but Boyhood feels alive with every beautiful, painful, sad, and genuinely funny moment. I can honestly say that I literally wanted to rewatch this nearly three-hour movie as soon as it was over.