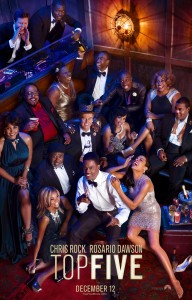 movie franchise and become a ‘serious actor’ with a film about a Haitian slave rebellion. On the day it opens, the Times sends him a reporter (Rosario Dawson) for an in-depth interview, and the two spend the day together, high-tailing it around New York City, stopping in for radio interviews, shopping for his bachelor party (he’s about to wed a reality starlet, played by Gabrielle Union), and visiting friends and relatives.

The cast is packed with Chris Rock cronies and they add to this semi-autobiographical vibe that permeates the movie and really makes it a thing of beauty. It allows him to do what he does best: he gets to weave his stand-up into the plot, sometimes cracking pretty vulgar, other times surprisingly sweet, riffing on other celebrities and exploring his thoughts on fame.

He challenges the people around him to make lists – the top 5 rappers seems to repeat itself as a kind of test he administers. So now I’m asking you, what’s yours?