Say what you will about Maggie Gyllenhaal, she’s very comfortable showing her tits on camera. Even now that they’re low-hangers and she’s past the age where a bra is obligatory.

Sherry (Gyllenhaal) has just been released from prison and is struggling to reintegrate into society. She’s struggling in a half-way home, looking for work, and trying to rekindle a 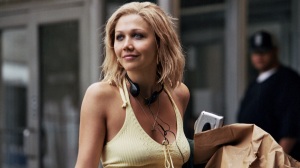 relationship with her very young daughter. Sherry is newly clean (thanks, prison!), emotionally stunted, and pretty raw. She’d be a wholly unlikeable character if not for the measured and sympathetic portrayal by Gyllenhaal, who tries inject Sherry with some dimension.

Meanwhile, the relationship between mother and daughter flounders. The little girl has been raised by her aunt and uncle, and her mother is a virtual stranger. Though the daughter is 5 or 6 at most, it’s a struggle to say which is the more mature. Sherry is needy and narcissistic and expects her daughter to respond to her cloying

overtures every time she comes calling. Unfortunately, real life doesn’t seem to much up to what she’d been dreaming of in prison.

Writer and director Laurie Collyer doesn’t mince words. This is gritty, unpleasant stuff, and there are no easy answers to be gained here. There are two primary concerns for Sherry, and for those of us watching her: can she regain custody (and for us, perhaps, should she), and can she stay away from the drugs?

I was really riveted by Sherry’s regression. When her father shows up, the way she panders for his attention and affection is uncomfortable, and in direct competition with that of her daughter. It’s sad, and perhaps Collyer tries a little too hard to create a too-inconvenient

checkered past to be responsible for her downward spiral. But there’s real pathos here. In fact, looking back, weighing all of Sherry’s pathologies, the dysfunctional and the desperation, I’m surprised that I didn’t come away feeling that this movie was depressing. Is there a secret vein of hope there? I’m not sure. And I’m not going to call this a great movie, but it strives to be realistic, and you have to admire it for its total abandonment of rose-coloured endings.