Ladies and gentlemen, this is my official entry into grumpy old crony-dom. I watched a teen comedy and hated every moment of it. 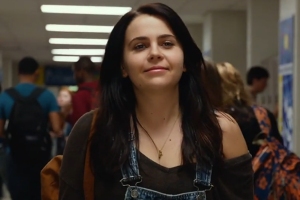 It hits every hallmark that a teen comedy should have: the neglectful parent, the social hierarchy, the cute boy next door, the mean girl, the dance. She even pretty-in-pinks her own homecoming dress for crying out loud (although substitute flannel for pink). But none of it works. None of it even comes close.

Mae Whitman, playing Bianca, the titular DUFF (designated ugly fat friend) is neither ugly nor fat. She’s actually eminently cute, and even the dowdification she undergoes in the film doesn’t make her unattractive (although those overalls have got to go). You may know her from Arrested Development or The Perks of Being a Wallflower, where she is all kinds of good and several varieties of charming. But in this movie she seems miscast. When Bianca goes through the obligatory musical montage of different outfits, it’s painful. It doesn’t just miss the 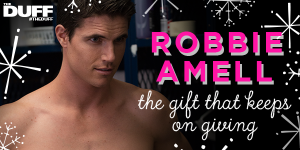 mark, it misses the point. We don’t fall for it, or her, and neither could anyone else. It’s awkward and obnoxious. The ugly duckling is supposed to be turning into a swan but instead she’s turned into a goose that honks by itself over in the corner.

The film varies wildly from its source material. The book shares a title and some character names, but that’s about it. It’s a little racier and a lot less will-they-or-won’t-they. The movie took its chance to be edgier and more subversive than others in its genre and basically shat all over it. There’s nothing subversive about the happy ending depending on getting the guy.

Anyway, the concept of the DUFF is revolting. The DUFF is adopted by a circle of hot girls to try to make themselves look better by comparison. The DUFF is the approachable one, the one 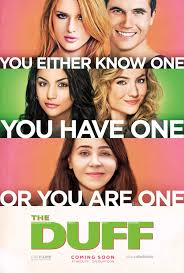 A caption to prey upon every adolescent’s insecurities

guys can safely chat up to gain the respect of the hot friends, and also intel on them. The movie defines these parameters strictly but then defies them continually. Bianca’s friends never give her any indication that this is true of their friendship – in fact, their little trio seems quite solid until Bianca herself tears it apart. Would I like this movie any better if it was more accurately titled The Curmudgeonly Third Wheel in Unfortunate Outfits? No. First, that’s a horrible acronym, but more importantly, this movie treats the clichés of a teen comedy as something to be ticked off a list. This is no John Hughes send up, it’s just embarrassingly derivative. This movie has no soul. Let’s flush it and forget it.