It’s impossible not to encounter an AWFUL lot of John Cusack when you’re perusing teen comedies. He practically had right of first refusal back in the 80s.

This one seems to lose a lot of sparkle the more I see it, and I’m not sure if it’s because it’s not aging well, or I’m not. Either way, the things that used to get me – the Peter Gabriel on the boom

box, the post-virginity snail mail, it all starts to feel like not quite enough. Like, is this really the gold standard? I’m not sure if it used to impress me, but nowadays I just can’t shake the feeling that Lloyd Dobler is a loser. “Noble underachiever” is a phrase that can only be used by someone with the word teen at the end of their age. Unemployed, unambitious lazybones is more like it. Does that make me sound like my mother? Sure he’s sweet, but I like my sweet with a steady paycheque and some hobbies that go beyond stalking.

This movie is so bad I can’t even. Hadn’t seen this before, and should have kept it that way. The effects are terrible, although not quite as terrible as the wigs on the stunt doubles, but nothing holds a candle to the terribleness of the sentient hamburger animation. I can’t believe this didn’t derail Cusack’s career then and there. This comedy, which deals repeatedly with Lane (Cusack) 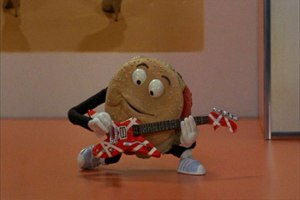 wanting (and attempting) to kill himself because his girlfriend dumped him, should be much too dark for a burger playing an Eddie Van Halen song. And yet!

Turns out, no one hates this movie more than John Cusack. He walked out of the movie after 20 minutes of the screening and accused writer-director Savage Steve Holland of tricking him. “Better Off Dead was the worst thing I have ever seen. I will never trust you as a director ever again, so don’t speak to me.” He felt used and foolish and finished working with Holland only out of contractual obligation. Too bad they don’t mention any of this on the back of the DVD.

Poor Molly Ringwald. She’s trying to turn 16 and it’s all going horribly wrong. John Cusack is only in this peripherally, as a skinny little nerd, but even he’s not enough to keep the nostalgic glow

alive. Matt recently re-watched this and couldn’t get over the overt racism – a gong literally sounds every time not-at-all-racistly-named Long Duk Dong comes on-screen. For me, it was the rape that was unbearable. There’s sexism throughout the movie, of course, but rape is rape. This isn’t creepy or questionable. It’s legally, certifiably, conviction-worthy rape, but the movie plays it like it’s just par for the course. John Hughes died in 2009, recently enough that a look back should have been painful, but we’ll never know what he thought because he all but retired from the spotlight in 1991 after John Candy died suddenly of a heart attack. He wrote a few terrible scripts – Maid In Manhattan, Drillbit Taylor – under a pseudonym but kept his privacy well-guarded. He was nevertheless a genius of his generation and I wish we could have heard him say he knew now that it was wrong. Because this movie does get it very, very wrong.

10 thoughts on “Ode to John Cusack”